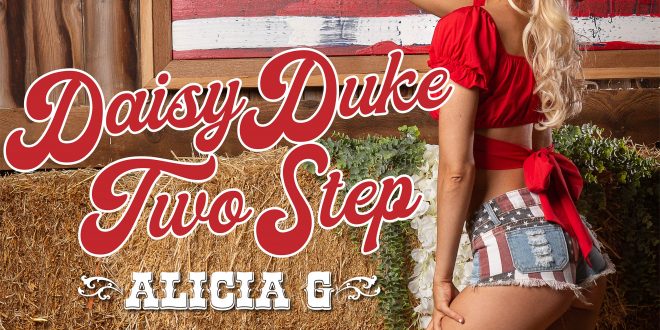 Alicia G has been making her mark across multiple mediums for a little while now, but in her new country/pop crossover “Daisy Duke Two Step,” she’s focusing on cultivating a new aspect of her creative identity that just might surprise more than a couple of her fans. While we know this girl can rap, sing, and cut up just about any groove, her foray into country comes as a pleasantly surprising addition to her list of attributes, proving that – alongside players like MGK and Ryan Upchurch – true musicians have the ability to make any kind of music they want.

While the twang of the lap steel in this single is definitely one of the most countrified elements in the mix, it’s not the sole component making “Daisy Duke Two Step” sound like a Nashville pop favorite. A lot of that has to do with Alicia G’s actual delivery, which feels as pastoral as it does confident, which is not as common a combination in indie country as I would like for it to be these days. She sings what she wants because she can, and her eagerness to do so puts her in rather rare company both in and outside of the country genre.

The layering of the lead vocal in “Daisy Duke Two Step” initially sounds like something we would more commonly hear out of a club track, but it adds a certain level of depth to the frontend of this mix that only makes the instrumental componentry sound more present and physical. There’s really nothing one-dimensional about the way this single has been stacked up, and the same goes for the hay-adorned music video for the song. Cosmetics are one thing, but bringing an attitude that matches the energy of the material takes a lot of talent you just can’t teach.

From beginning to end here, Alicia G is using every bit of tension off of the bassline in “Daisy Duke Two Step” to make the groove even harder, and in the video, her command over the rhythm influences some of the best moves she throws our way. This is a player who lives and dies by the biggest beats she can arrange together with her verses, and for the first time, her versatility is breaking the boundaries that separate four different conflicting genres, all in the name of creating something melodic for us to swing to.

Between the eroticized, hard-partying video and the sonic substance of the song itself, Alicia G’s “Daisy Duke Two Step” feels like a moment of creative growth and a new benchmark for this hyped singer and songwriter, and something that fans of both pop and country music should be very pleased with this year. Crossovers are all the rage right now, but there’s nothing here to suggest that Alicia G was simply trying to bandwagon a trend. If anything, she’s looking to raise her own game and breaking into another style of music is probably the most relevant and creatively-stimulating way to go about it.

Previous HARMLESS HABIT Releases New Single, “Lights Out”!
Next Single Review: “Sure Got Cold After the Rain Fell” Greg Hoy & The Boys