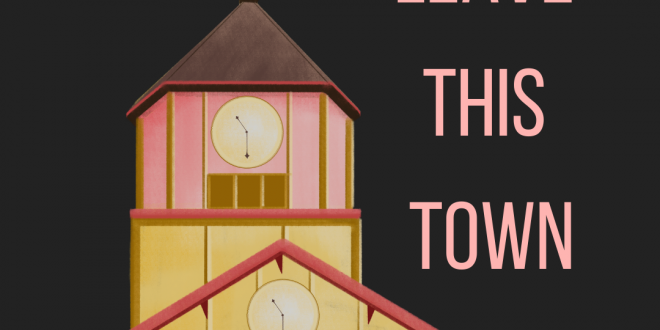 Eclectic pop doesn’t have to be the scattered minimalism that’s been taking over the college radio dial lately; it can be tight, focused, and even a little retro, much as it is in the new single “Leave This Town” from Summer Rain. Though it can be said that Summer Rain has a rather old fashioned songwriting aesthetic to their work, this has little influence over the bright buoyancy of this track and its whimsical video, both of which have been generating a lot of new critical interest in the work this band has been submitting in the past year.

There’s no getting away from the Beatles element in this song, but it’s not so prominent as to take away from the originality of the harmonies. Summer Rain isn’t hiding their affection for the British Invasion sound; the video for “Leave This Town” tips its hat at the Fab Four both visually and musically. The biggest link between the two acts is the efficiency of the songwriting here, which makes it impossible to accuse this band of being the kind of indulgent, recycled unit that a lot of their contemporaries in the Canadian underground have started to sound like lately.

This hook sways with the percussion as opposed to standing on its own, and it’s because of this fluid arrangement that we’re really able to appreciate the depth of the lyrics and how much of their sentiments are reflected in the music beneath them. There’s a symmetry between the verses and the melodies in this performance that only reinforces the narrative rather than suggesting new elements within the song, and where some might see this as being overly simple, I think it’s the biggest reason why “Leave This Town” feels like a straightforward, filler-free pop single from a credible group of musicians.

The harmonies that start with the vocals in this song are difficult to escape, but they’re also one of the most relaxed components of the track. No one is in a hurry to get away from the beat in “Leave This Town;” contrarily, I would even say that there’s a hesitancy to come to a stop that only makes me wonder how epic this same song would sound in a live concert. The chemistry between the players is absolutely amazing, and if put in the right circumstances, it could produce some incredible results even more gripping than what we’ve got here.

B.C.’s underground music scene has been throwing a lot more curveballs our way than anything we’ve heard to the south in Seattle and Portland lately, and among the more intriguing left-field acts I’ve listened to in 2022, Summer Rain is probably the most exciting. They’ve got a lot in common with the retro rockers who took the New York circuit by storm some fifteen years ago, but with one big difference – there’s really no ego to check in their music. They care about what they’re playing, and the substance of their work truly speaks for itself in “Leave This Town.”