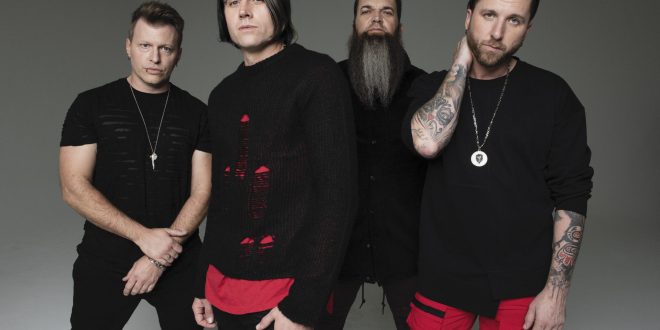 Today, Three Days Grace share “Neurotic (Ft Lukas Rossi),” the second song off their forthcoming album, EXPLOSIONS, which will be out on May 6th via RCA Records. The new track originated as a collaboration between Neil Sanderson of the band and Lukas Rossi of Rockstar Supernova for the side project King City. “Neurotic (Ft Lukas Rossi)” finds Three Days Grace’s lead singer, Matt Walst, and Rossi dueting on this bludgeoning version teeming with nervous energy. “We added a Three Days Grace spin to it,” Matt reveals. “Lukas has a great voice, and we match up pretty well.” “Everything is about tension and release,” adds Neil. “It defines the record.”

Three Days Grace’s latest single,“So Called Life,” is #1 again for the 3rd week in a row at Billboard’s Mainstream Rock Songs Chart. This was the band’s 17th #1 song on the Mediabase Chart and 16th #1 on the Billboard chart and tied the internationally acclaimed and multi-platinum certified Canadian band with Shinedown for the artist with most #1’s on the Billboard chart. The song’s music video was directed by Jon Vulpine. Listen to “So Called Life” and watch the music video HERE. EXPLOSIONS is available for pre-order on all formats HERE.

The band has recently confirmed tour dates throughout April and May of 2022 in cities including Charleston, Cincinnati, and Madison (full dates below). Black Veil Brides, Motionless in White, Ice Nine Kills, and Lilith Czar will support Three Days Grace on select dates, and the band will support Godsmack in Tampa, Orlando, Newark, Worcester, Milwaukee, and Minneapolis. Tickets for all shows are on sale now HERE.