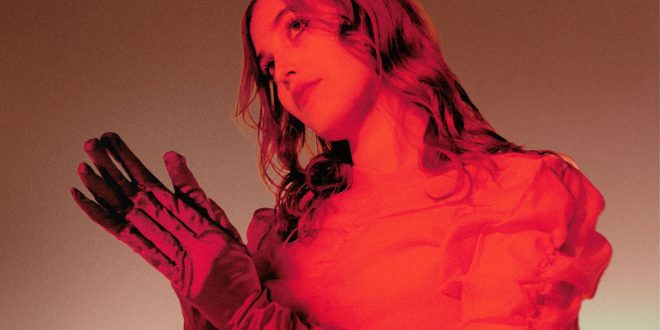 Hatchie shares a lyric video for “Giving The World Away,” the title track and new single from her anticipated new album, Giving The World Away. The album, produced by Jorge Elbrecht, is available for pre-order now and due April 22nd via Secretly Canadian.

“‘Giving The World Away’ is about being gentle with yourself in the throes of depression,” says Hatchie. “We made a simple lyric video with analogue effects to let the lyrics of the song speak for themselves.”

Last month Hatchie announced the album and released a video for lead single “Quicksand,” which was co-written by Olivia Rodrigo collaborator Dan Nigro. PAPER Magazine called the track “a total headrush of a pop song that crystallizes self-doubt into dazzling anthemia,” with Nylon saying, “if there’s more like this coming up, then we’ve got a feeling that 2022 is going to be Hatchie’s year.”

Hatchie is hitting the road this summer on a North American tour that kicks off on May 4th in Washington D.C. Tour highlights include Music Hall of Williamsburg in Brooklyn, NY on May 7th, Sleeping Village in Chicago on May 14th and the Lodge Room in Los Angeles on May 26th. All dates can be found HERE.