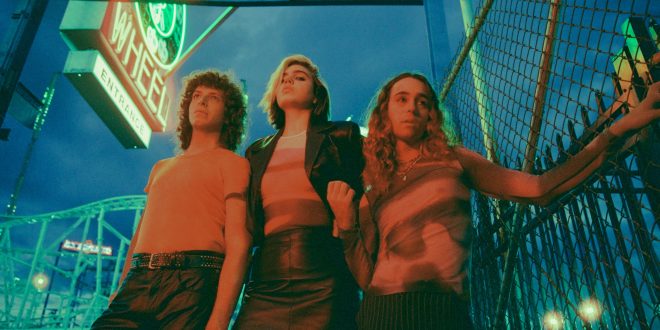 New York trio Sunflower Bean released their sophomore album Twentytwo in Blue in 2018, which skyrocketed to the UK’s Top 40, and quickly followed it with 2019’s King of the Dudes EP, which saw the band’s Triple A debut with “Come For Me.”

Now, three years later, the band returns with their long-awaited third studio album. Headful of Sugar will be released on May 6 via Mom + Pop, and follows Sunflower Bean navigating the agony and ecstasy of contemporary American life. “Tomorrow is not promised, no tour is promised, no popularity is promised, no health or money is promised,” bassist/vocalist Julia Cumming says. “Why not make what you want to make on your own terms? Why not make a record that makes you want to dance? Why not make a record that makes you want to scream?” A psychedelic headrush designed to be played loud with the windows down, Headful of Sugar features songwriting collaborations with the likes of Shamir, Suzy Shinn and Jacob Portrait (who also produced, mixed and co-engineered the record with Faber).

Today Sunflower Bean also share Headful of Sugar’s lead single and opening track, the taut groove “Who Put You Up To This?” It’s a kiss-off to a former lover, maybe, but also a former self. “In another life I was a bitch/ In another life I was your bitch/ Here’s how it turned out,” Cumming sings, her voice alternating between the gritty and the divine, drawing comparisons to contemporary iconoclasts like St. Vincent. “Who Put You Up to This?” finds freedom in a fraught predicament, her sense of self fully divorced from the circumstances she finds herself in. The band says of the track, “Are you satisfied? Who put you up to do things that you do? Was it your own choice? Questioning your life is the first step to taking the agency to change it. Sometimes you have to let go of who you have been so that you can become who you want to be. “ Listen to the track and watch the music video now.

Sunflower Bean are known for their singular live performances, which has seen them perform at major festivals like Glastonbury, Governors Ball, Bonnaroo, Lollapalooza, Reading & Leeds, and tour with the likes of Beck, Cage the Elephant, Interpol, Courtney Barnett, The Pixies, The Kills, DIIV, Courtney Barnett, and Wolf Alice, and even open for Bernie Sanders during his primary campaign rallies. Now, the band is gearing up to get back on the road for a massive Spring tour in support of Headful of Sugar. Tour dates go on-sale this Friday at 10 am locally, but you can sign up for early access pre-sales now HERE. See below to find a show near you.