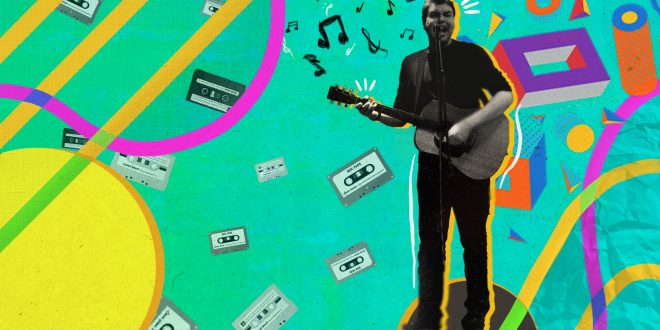 Escape Ring is the moniker of Darren Moss, a hardworking and multi talented artist hailing from Melbourne, Australia. Heavily influenced by the greats such as Beach Boys and Weezer, he has channeled this energy and encapsulated it perfectly in a new found sound of his which has already seen plenty of success. Featuring in the likes of NBC’s ‘The Biggest Loser’ and working with award winning producers TJ (Taylor Swift, One Republic) and Ariel Chobaz (Nicki Minaj, Drake), there is a clear project in mind, with two singles having dropped so far.

Sophomore single ‘Winning the War’ is the second installment from the forthcoming debut album expected later in 2022, and it’s an explosion of inspiration and hope from Escape Ring, with singalong chorus lines and an immediate sense of encouragement and fight. You can feel the meaning and dedication behind this song, where Moss has had an ongoing battle with his mind and the everyday struggles we can all face and relate to in an instant.

Without realizing, you’ll be singing along to this feel-good pop-rock anthem, and it’s clear that Moss has a knack for songwriting and knowing how to write a great and memorable song that sticks. And in a world of quick-fix meaningless ones, it will be very easy to latch onto this heartfelt track. There are remnants of a classic 80s rock twang in the production and guitar chords, and it all speaks to the narrative that we are all going to be OK, and it works.

Escape Ring are looking to take 2022 by storm, and it looks like they’re going to do just that with their upbeat and modern, refined twist on a classic sound. ‘Winning the War’ has the feel of a song that will do great things, and will be heard by audiences far and wide with it’s innovative exploration of sonics.

The song perfectly walks the line between vintage and modern. Could you talk about how you achieved that balance?

The clear idea we had was: what we think is unbeatable about vintage music is the songwriting, with the attention to chord changes, harmonies, melody being king. The other thing is: everything is played by humans. It’s a real drummer, real horn section etc. So we did that. Then we wanted to almost treat it like it’s an old record but has had the very latest remastering job done on it. We wanted it to sonically compete with the newest tracks that were out there.

There’s a triumphant and exuberant attitude to the track. Was that inspired by the lyrical themes, or vice versa?

One of the things I struggle with in my life, and it is less and less as I work on it – is just fighting my own mind. Like convincing yourself you can do something and then the next day starting over again from square one and having to do it again. The mental exhaustion and waste of time that is. Like Groundhog Day. That is what this song is about. I feel like I am winning the war. Today. Today being the key thing, it kind of implies today, but maybe not tomorrow.

What was it like working with producers TJ and Ariel Chobaz? Were there any magical, “aha” moments in the studio?

In this case it was produced by me, during one or our lockdowns here in Australia, but sent over to Los Angeles to be mixed by these very talented people. There was a little bit of tweaking back and forth, but I loved what they did with it pretty much from the get go. We were bringing the vintage, they were bringing the modern.

Even though it’s an intensely personal song, do you feel like there’s a broader message about the state of the word? With the pandemic and the intense political divisions, I think all of us could use a win these days.

I wrote the song to kind of remind me, and it has actually helped. But I wanted to write something that anyone could put on and use to pump themselves up. So far people I have been playing it to have really responded.

You’ve released two singles already. What’s next for you? When can we expect more music?

We have two more singles recorded and ready to go. “You’re Number One” and “Rainbow”. We actually think these ones are even stronger, we kind of wanted to work up to them. Although we are really happy with “Winning The War” we can’t wait for people to hear these next ones. Then we will release a few more songs and then drop the parent album “Anybody Can Do Anything”. We want to put out an album that feels like wall to wall singles. And playing live is also next on the cards.

Stephen Vicino is the founder of MusicExistence.com. He created this site to give talented musicians a voice and a way to be discovered.
@@svicino
Previous Music to Help You Concentrate: 3 Different Scenarios
Next Ohso Davis – “You Who”