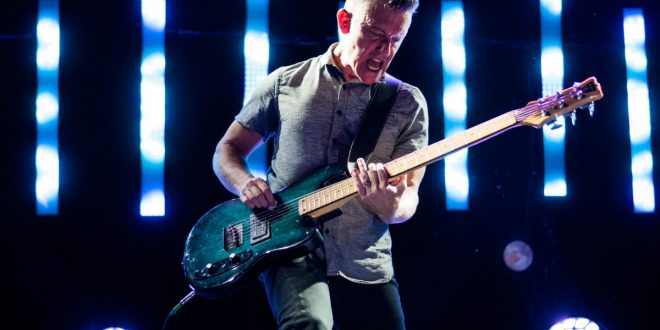 El Ten Eleven, who recently announced the March 4 arrival of New Year’s Eve via Joyful Noise Recordings, have released a third single from the forthcoming collection: “The Time Knife”

Kristian Dunn explains how the TV show, “The Good Place,” influenced the track: “A character named Chidi has just returned from an interdimensional trip that only lasted a moment and, overwhelmed, says, ‘I just saw a trillion different realities folding onto each other like thin sheets of metal forming a single blade.’ Ted Danson’s character responds, saying, ‘Yeah, yeah, the time knife, we’ve all seen it.’ My wife and I were watching this together and for whatever reason this struck us as so funny we couldn’t stop laughing. This song is a combination of my experience with my wife (and experiences, journeys, really, generally with her) and Chidi’s journey.”

“The Time Knife” is the third preview of the forthcoming collection, with the Los Angeles-based duo previously sharing “Meta Metta,” a performance clip was filmed at The Cube in Los Angeles, and the title track

“New Year’s Eve is a reference to guarded optimism about what is to come. At the time, it seemed like our national divisiveness might be waning and the end of the pandemic was near. But of course that’s not how it turned out,” said Dunn upon news of the forthcoming album’s release. “That’s what New Year’s Eves are. You think it’s gonna be a fun night, but usually it’s disappointing at the end.”

Over the course of 20 years and 11 albums, El Ten Eleven continue to redefine the potential of bass guitar and drums. With an arsenal of pedals, labyrinthine arrangements, and a deft use of looping, Dunn and Tim Fogarty create two-man symphonies. With New Year’s Eve, the duo melds electrifying disco grooves with their tried-and-true experimental rock atmospherics.