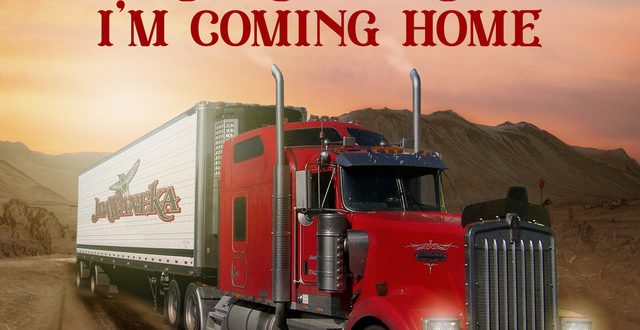 Road trip music is a subgenre all on its own, and in the realm of its contemporary releases, I think that we need to talk about the latest single from singer/songwriter Jim Waneka, “I’m Coming Home.” Equal parts country-rock ballad and homage to an easy-going brand of Americana, “I’m Coming Home” has a cool, classic Nashville energy that’s pretty irresistible if you’re a fan of country’s more casual side, but its appeal isn’t limited to cowboys alone. There’s a rather tempting sense of adventure implanted in the lyrics and rhythm of this music that’s hard to resist from the start, and to me, this makes it a universally accessible listen to those with a little wanderlust in their blood.

This is definitely a beat-driven single from an instrumental perspective, which isn’t to say that Waneka isn’t doing his part to establish an even-keeled melodic foundation from the get-go; quite the contrary. Truth be told, I think that the music video’s highway-laden visual scheme emphasizes the rhythm just enough to make clear how important a movement-centric narrative was to this songwriter. He wants us to feel the heat coming off of the asphalt in the summer sun here, and his conceptual approach to the tempo is part of the way he accomplishes this.

The music video for “I’m Coming Home” takes the titular theme quite literally but intersperses enough road-worn emotionality to avoid the very notion of camp from one frame to the next. The last thing Waneka is looking for here is a sappy cosmetic structure; he’s really got something he wants to say to the audience, and perhaps the inspiration for the song itself, and I like how seriously he approaches every detail in both the video and the single as a result of his creative attitude.

These are truly some of the more evocative country harmonies I’ve listened to in the past couple of months, and I would even dare to say that they remind me more of a cut and dry sound that hasn’t been making waves in Nashville in quite a long time – much to the chagrin of hardcore aficionados like myself. Jim Waneka is a player who doesn’t have a lot of time for the filler that his peers are ready to make an entire LP around, and if this weren’t the case, I don’t think that his music would be hitting high marks with critics on such a consistent basis.

Appealing to the country faithful and the passive audience member as well, Jim Waneka’s “I’m Coming Home” is a gem of a single and music video that is certain to strike a good chord with anyone who gives it a listen this winter. The buzz around this singer/songwriter is as legitimate as it gets, and while I think he’s going to face some competition from an increasingly detail-oriented underground in American country music, his is such a unique profile that I don’t believe he needs to worry about his growing fan base eroding anytime in the near future.