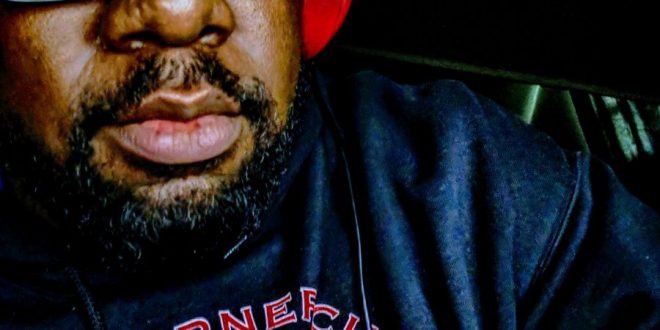 (leave) nelson b is Nelson Brodhead’s very clever moniker for his ambient/instrumental/electronic project. His latest release as (leave) nelson b is a three-track EP entitled Version II:The Oux Remixes. As the title suggests, all of these tracks are remixes. They were originally written and performed by Manae Hammond and Indigo Finamore who are known collectively as the Chicago-based art-pop duo, Oux (pronounced “awe”).

Oux is worth a listen for sure but in true remix form, these tracks could not sound more different than their source material. This is meant in the most positive and complementary way possible. An artist that remixes another’s work inevitability has to field questions of originality, but (leave) nelson b manages to create something completely unique and extraordinarily different from Oux’s samples. These are new and complete songs crafted by an artist/producer that knows his business.

“Noose (Saint Nothing Remix)” is the shortest track on the EP at 1:21, but it effectively sets the tone beginning with a quiet heartbeat loop before bursting into a total jam. The vocal samples compliment an instrumental groove that makes you want to get out of the house and bop around the city with big old headphones just taking in the sights with your own personal soundtrack.

The next track, “Impeach the Doom (Mood Remix)” starts with a basic hip-hop backbone and builds a soundscape layer upon layer. The beat hops between two grooves and vocal samples. It’s somehow chill and exciting at once. There’s a lot going on in this one and all the different layers in the mix make it very interesting.

The final track, “Augave (Honey Remix)” includes bass by Robbie Roe and guitar by Brad Flickenger of Houses and Hotels. This one gives off some heavier vibes, The Matrix vibes even, as the EP ends somewhere in groove-metal territory. Like all these tracks it’s very cinematic and the shredding guitar is definitely a bonus.

With “lo-fi hip-hop beats to relax/study to” being a dominant force in the instrumental music scene, it’s easy to forget that one can in fact actively listen to modern instrumental music. It’s not just background music, not accompaniment, not just to set a vibe, or as a study aid (though these are all noble qualities in music as well).

In Version II:The Oux Remixes, (leave) nelson b creates remixes that sound chill without really being in the background. They are both groovy and industrial, ambient yet exigent (despite Brodhead’s introverted alias). As a producer, mixer, and artist Brodhead effectively combines genres and creates something wholly new from his chosen samples.

Read our Q&A with Nelson below:

Listening to these tracks it’s actually quite hard to pin down just one influence. What were the major influences on these tracks? What are some of your other musical and non-musical influences?

Each track was attacked very differently. Noose was very much a Mr Hahn from Linkin Park type of track, always thought he was the underrated member of that band.

Impeach the Doom was very much, like most of my work, very Wu-Tang inspired, particularly the track “As High As Wu Tang Get ” from their second record. I just wanted to funk up the track with little Sonic voices going on. Very minimalist and isolating.

Augave was my chance to really hone in on what collaboration really meant, that song had done drama but in the end I came out the otherwise of it with a fire ass track that is my best DJ Shadow impersonation, without duplicating a DJ Shadow element

I am constantly fighting with influences. For example, because I love DJ Premier and Pete Rock, I could never attempt to sound like them. That’s my way of paying respect and attempting to pave my own way. I pay homage though, doing my drums is a nod to things I picked up from other classic people like Q Tip and Large Professor.

As far as non musical influences, video games and authors are big ones. I did this record after finishing Yakuza: Like a Dragon and How Music Became Free, and those definitely influenced the brevity of the record. A punch in the face is brief, but impactful.

Oux is a really cool band. How did you find out about them? Can you speak a bit about your relationship with the band and their music?

Through controversy, honestly, but I don’t want that to be what they are remembered for. No one’s legacy should be victimhood. From my mind these are people similar to my little sister, and they should have, and do have, great music to their name and I wanted to remind people of that.

I just really liked the Honeymood EP and just went and did it for fun.

I wouldn’t say we have a relationship exactly, they cool people and I respect them immensely, but we are not friends, at least not yet. Just musicians that run in similar circles, albeit thier influence is much larger than mine.

They should be remembered as influential musicians that reminds mfs that representation matters.

What’s the (leave) nelson b production process look like?

For this record? Sample and melody gets established then the drums get agonizingly worked on, and that can be a multi day event of trial and error and then live elements via VSTs or bass and guitars in the case of Augave are added then it’s time t try mix and master which is the most fun for me.

I used to think I had to be quick to be good, but now I feel fine taking a week to do a track.

Is there any gear that you can’t work without?

My MPC Live. I love that thing and has become invaluable through the updates Akai keeps pushing out. Having the pads and a sample really is the basis of what I do when I sample.

You created the album art for this release and it seems you’ve used this model before. Can you talk about your experience making album art for your music?

Knifemom and I have worked together since 2.0: Phantom came out in January of 2020 and I have no intention of stopping that. They are great people, on time, and deliver with some heat every time I need them to. I may give them some direction, but in this case it was a random photo I fell in love with. Always a professional and always kind to me. Hard to find in this business

Stephen Vicino is the founder of MusicExistence.com. He created this site to give talented musicians a voice and a way to be discovered.
@@svicino
Previous Molly Moore shares official visualizer for “Shy”
Next Live and Learn – new album by Meg Williams now available