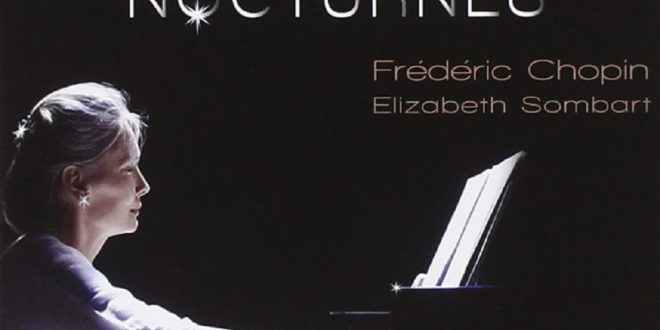 Elizabeth Sombart has dedicated much of her life to music since age seven and it shows. Because of this she has manages to transcend Space and Time via her latest 21 piece masterpiece. The pianist’s latest collection Singing the Nocturnes revisits the compositions of Polish born master Frederic Chopin. She achieves the same exquisite results that are heard in her interpretations of Beethoven and her concert appearances around the globe. She draws from a vast reservoir of gifts that have earned her prestigious awards such as the Chevalier de l’Ordre National du Mérite for lifetime achievement in 2006 and attained the rank of Chevalier de l’Ordre des Arts et des Lettres in 2008. Even a single listen to Singing the Nocturnes shows why.

I believe even those unfamiliar with Chopin and classical music in general will come away from this collection satisfied. It is a sprawling affair, over twenty pieces included in the collection, but the vast majority are condensed and melodically focused. Piano, likewise, is a much more accessible instrument for modern audiences than other classical stalwarts – it has a pronounced presence in popular music that helps neophyte classical listeners connect with the material.

It as solo as the term gets. Sombart plays with no accompaniment and no production trickery manipulating her sound. I hear a certain amount of studio atmospherics shaping the various performances, but that’s a natural touch rather than any sort of affectation. “Op. 9 No. 1 in B-Flat Minor” and “Op. 9 No. 2 in E-Flat Major” begins the collection with two pieces introducing listeners to many of the primary motifs dominating these pieces. Chopin has a penchant for arguably offbeat keys that makes itself obvious as the album continues but opting to open the release in more familiar territory is a shrewd move.

“Op. 15 No. 2 in F-Sharp Major” is an example of those arguably offbeat keys. Sombart’s playing blends abbreviated flurries of notes with single chords that linger like the afterglow of lightning strikes on an obsidian sky. I cannot help but be continually impressed by her ability to maintain a relaxed and even lyrical dialogue between multiple piano lines. Chopin’s compositions here often emerge over time rather than presenting themselves in total from the outset. “Op. 32 No. 2 in A-Flat Major” is a prime example of that. The near-tentative way it establishes itself before becoming more active lures listeners into its web.

I find the later performance “Op. 55 No. 1 in F Minor” to be one of the most affecting performances included on this album. There is a definite sense of melancholy pervading the track but Sombart’s playing tempers its intensity with elegant work along the keys. Singing the Nocturnes is informed with a poetic sensibility that never risks ridicule and burnishes Elizabeth Sombart’s list of achievements with another high point. Her status and legacy as one of classical music’s foremost practitioners working today is more secure than ever before. It will be interesting to see who she turns to with her next release, but I fully expect it will match the heights she reaches here.