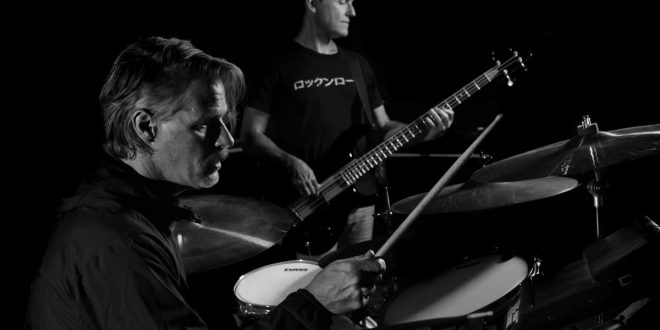 “New Year’s Eve is a reference to guarded optimism about what is to come. At the time, it seemed like our national divisiveness might be waning and the end of the pandemic was near. But of course that’s not how it turned out,” bassist Kristian Dunn said of the album’s inspiration. “That’s what New Year’s Eves are. You think it’s gonna be a fun night, but usually it’s disappointing at the end.”

The outfit preview New Year’s Eve with the release of a new song and accompanying video for “Meta Metta.” The performance clip was filmed at The Cube in Los Angeles.

Over the course of 20 years and 11 albums, El Ten Eleven has continued to redefine the potential of bass guitar and drums. With an arsenal of pedals, labyrinthine arrangements, and a deft use of looping, Kristian Dunn (bass) and Tim Fogarty (drums) create two-man symphonies. With New Year’s Eve, the duo melds electrifying disco grooves with their tried-and-true experimental rock atmospherics.

Throughout its six tracks, New Year’s Eve romps through infectious grooves, Rototom blasts, electrifying breakdowns, and meditative reprieves. Along with the pedal-fueled trickery and musical prowess fans have come to expect from El Ten Eleven, New Year’s Eve channels Dunn’s lifelong love of disco. Channeling memories of a childhood spent spinning Niles Rogers and Chic while his peers blared heavy metal, Dunn imbued his own emotions onto the delightful excess of disco.

Previous Scary Kids Scaring Kids and D.R.U.G.S. set for US Tour kicking off next month
Next INGESTED kick off US tour with Fit For an Autopsy tonight in Columbus, OH