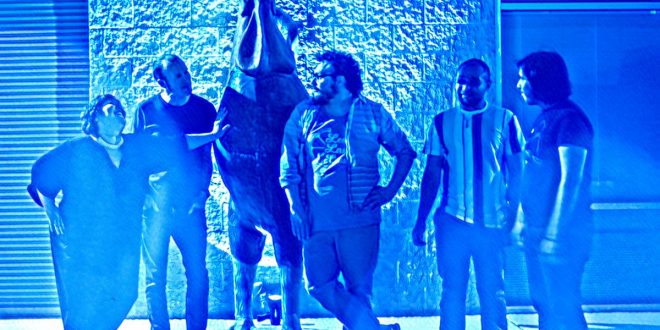 EEP is a truly distinctive shoegaze band out of El Paso, TX. The band is typically a five-piece consisting of multiinstrumentalists Ross Ingram (Guitar, Vocals, Keys, Synth, Percussion), Rosie Varela (Guitar, Vocals, Synth, Flute, Percussion), Sebastian Estrada (Guitar, Bass, Synth), Serge Carrasco (Guitar, Vocals, Keys, Synth, Percussion), and Lawrence Brown III (Drums, Percussion, Vocals) although the album does feature some special guest performers on percussion, keys, flute, and vocals. Their new album Winter Skin is out now on bandcamp and it’s definitely worth a listen this winter. The album has all the defining features of shoegaze: it’s roomy, dreamy, and ethereal, and honestly, this is some of the most uplifting Shoegaze you’ll hear. There’s a ton of jammy ‘90s influence in the melodies, guitar tones, and even the mixolydian scales and chord progressions hint at “No Rain” and Jagged Little Pill.

The first track “Hanging on a Wire” is all dreamy guitars and sweet vocal harmonies. Varela really soars here and it’s a perfect opener that highlights the shoegaze of it all. This is an important start because as the album plays on, EEP is gonna veer off in unexpected directions. “No Inbetween” starts with a percussion jam and goes into an upbeat indie rocker soaked in reverb. Poppy vocals, thudding bass, and a rad psychedelic wah guitar solo crescendo and give way to a breezy fade-out.

So many of these tracks drift seamlessly into each other. “A Message to You” is an epic indie rock number that evokes a heavier Alvvays and it flows right out of the previous tune. It’s refreshing how much this album feels like a complete entity rather than just a collection of finished songs thrown together.

“Ángeles” is a major tone shift, but not jarringly so. It features Belinda Subraman and Keith Thompson on djembe while Lawrence Brown III holds it down drumming a slow heavy bolero. It’s sung entirely in Spanish. It is a strikingly beautiful and powerful song. Plus, there’s some seriously cool reverse guitar effects.

“Today I Woke Up” brings us right back to some of that good major-y ‘90s guitar stuff and goes right into “Stubblefield” which features a vocal cannon! The lyrics /this isn’t real/back to where we started /love is a dangerous game/better we’re going in separate ways/ whirl around each other in a maelstrom of warm psychedelic vibes. Maybe their influence comes from the ‘60s circa “Tomorrow Never Knows” rather than the ‘90s…

“Stargazer.” Okay, first of all, y’all are gazing in the wrong direction. This is a shoegaze band. Secondly despite that, this is some of the most on-brand shoegaze music on the album, but with some really crunchy lo-fi layered in there. Really digging this one.

Between the atmospheric synths, added flutes, and djembes this is something different and special in the world of shoegaze. You can listen to this record and love it without knowing a thing about how beautiful and diverse the band is. EEP is a multiracial band supporting each other through a number of hardships. Singer/songwriter Rosie Varela is losing her eyesight. Drummer/vocalist Lawrence Brown III has been blind since birth. Different ages, different experiences, all in one excellent band. So when you get chilly this winter, try wrapping yourself up in the heavy, inspiring comfort of Winter Skin.

What drew you to the shoegaze genre and made you think: “I wanna play that kind of music”?

Rosie: I have always loved walls of sound, but I was an accidental shoegaze songwriter. When I wrote “Hogar,” the first song on our first album “Death of a Very Good Machine,” I wanted to create a cocoon of washed-out reverb-y guitar. I played the song for my husband and he said, “I love it. That’s shoegaze.” But what sealed the deal for me was listening to Verve’s “A Storm In Heaven,” Slowdive’s “Pygmalion” and Seely’s “Julie Only.”

Then I wanted to explore that exclusively. I was lucky that Ross (our bandmate and producer) was a shoegaze fan as well. But the magic really started when we asked three brilliant non-shoegaze-influenced musicians to join EEP. The combination of varied influences in the band creates shoegaze that has elements of many different kinds of music.

What does the album’s title “Winter Skin” mean to the band?

Rosie: The closing song “Slow Down” has a lyric that sums up the collective experience of the past two years and offers hope for the future: “Shed your anxious shaking/Winter Skin/And let yourself/Be something new again.”

How was it bringing on multiple guest musicians to record?

Ross: It’s always exciting to collaborate with musicians outside the main EEP lineup. We know so many great musicians and it’s fun to see how they interpret and react to our songs and where their contributions take the song.

A lot of these songs were written during the pandemic. What was your songwriting process for this album and did it look any different from the last release?

Serge: On Winter Skin, I feel we collaborated more than on Death of a Very Good Machine. Not to say that there wasn’t collaboration on DOAVGM, but I feel that it took place more often on this record. Somebody would bring in a demo and we’d spend a day or two in the studio just fleshing them out, bouncing ideas off one another and following our instincts, taking them from this rigid skeleton, to a breathing thing full of twists and turns.

Rosie: When we had the first studio session where we could all be back in the studio, the joy in the room was palpable. It’s like we got let out of our cages and we could play together again. By the time we got back into the studio, we had already remotely recorded five songs on the album. There’s nothing better than the interplay of ideas and experiments that happen in-person in the studio. The last four songs we recorded in the studio are definitely the most experimental on the album.

EEP has two kinds of songs in our songwriting process. The first is when one of us comes to the band with a fully fleshed-out demo. Basically, everyone then replaces parts in the demo with their own original ideas. It’s either done in-studio or band members do them at home.

The other way that we write is when we’re all able to be in the studio and it honestly is like kids playing in a toy store. We might start with one riff and we then record every idea that everyone has. In both cases, it is a very iterative process where the finished song may sound very different from the original demo or riff. We generally don’t leave out anyone’s parts. So far, everything we write together blends beautifully.

What role does place play in your sound? Do the sights, sounds, and vibes of El Paso come through in the music?

Serge: Place is a little hard to triangulate for EEP because while most of us live in El Paso, Sebastian is now living in Denver, which should technically make us a bi-state band. We also make most of our records out in Sunland Park, New Mexico at the studio Ross, Sebastian and Rosie own called Brainville, which could very well make us a tri-state band!

Still, most of us consider El Paso home, so I think that’s where we feel most rooted and the strongest connection. El Paso has a high desert climate, so it’s very dry, hot, sunny, and has good weather year-round. I think EEP’s music is very bright and hopeful. I suppose that tracks. El Paso is also right on the border of the U.S. and Mexico.

From Brainville, you can see the notorious border wall off in the near distance. In El Paso and throughout New Mexico, you might code switch multiple times in a conversation, and you have to be familiar with English and Spanish if you want to get the full experience. We haven’t written a song with a code switch yet, but have released two songs sung entirely in Spanish—“Hogar” and “Ángeles.”

Both were organic compositions and very fluid, and done with a lot of love and intention to bridge the gap between English and Spanish-speaking audiences. You don’t necessarily have to speak Spanish or English to get the message, though. The music is the focus and we spend a lot of time getting the sounds right so that no matter what language you speak, the music will hit home. I’ll also add that I think we feel plugged into the El Paso music scene and the sounds that are coming out of here right now are up there with anything I’ve heard in other places.

Stephen Vicino is the founder of MusicExistence.com. He created this site to give talented musicians a voice and a way to be discovered.
@@svicino
Previous Elixrexports Releases “Envy”
Next SEVEN YEAR WITCH Release Official Music Video for Cover of AKON’s Mega-Hit Single “I Wanna Love You”!