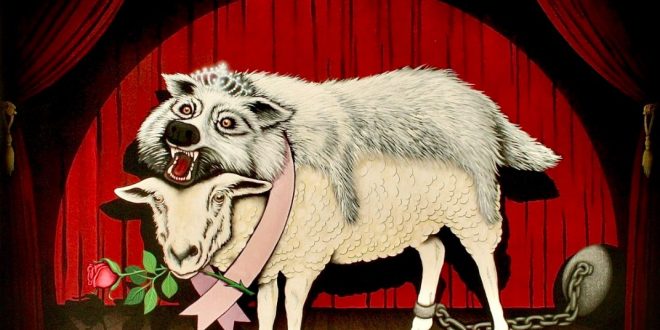 Homeless Theatre is a creative reset for three-piece DigDog. The band has prior releases under their belt but their latest nine song collection has a bold quality you don’t often hear from established bands. Different influences converge in Brad Metz, Jack Ringca, and Alexei Dotsenko’s music into a coherent and individual rock songs. Rock is an overarching label for what they do; the truth has more nuance. You hear post-punk running through the collection, progressive-minded fare, and a plethora of other strands threaded through the band’s tapestry. Homeless Theatre is full of convincing color.

The trio opens the release with “Highfingers”. DigDog take on a guitar-centric sound without touching on any stereotypical rock guitar histrionics. They achieve an appropriately unnerved quality for a song wrestling with questions and reactions to mortality. Prominent guitar doesn’t mean it’s a dominant instrument, however – the rhythm section playing during the song is spry and highly musical. The production pulls off the nimble trick of putting the bass and drums front and center while still ceding the necessary ground to the guitar.

They aren’t afraid to drop the hammer on listeners, but their manner of doing so is decidedly their own. “One Guarantee” recalls the opener in some respects, particularly its introduction, but the trio spikes this particular concoction with a generous helping of buzzsaw guitar. It reaches an altogether higher level, however, during the following track. “Sirens of Hell” alternates blistering steamroller guitar riffing with much more sedate passages. It’s a classic template and retains its effect here, but how DigDog utilizes it sets them apart.

You can’t take anything for granted with these songs. The guitar has a bright sound countering its often jarring minor key punctuations and the way it works with the bass and drums creates further distinctions. This isn’t your standard rock setup or power trio configuration. “Homeless Theatre” has a lowkey ominous opening many listeners will think gains an added dramatic measure from its airiness. There is a gradual segue from near the song’s midway point into harsher textures than before climaxing with crushing guitar near the end. Some may believe the track has excessive verbiage, but attentive listeners will admire the sharply written lyrics.

Their love for progressive arrangements really comes alive with the song “Tree Bones” and it reaches virtuosic heights earlier tracks never scale. Don’t misunderstand. DigDog’s musicianship is one of the album’s consistent high points and it shines particularly bright during this song. Several tricky tempo changes pepper the song with the sort of adventurous we don’t often hear from bands in the popular music arena and they have ample chops to pull it off. The improbably titled “Firemelon Beaverwolf” opens as a screaming quasi-metal parody before shifting gears. There’s definitely a degree of satire present in this cut, but there’s also a powerful imagination at work.

DigDog’s reorientation doesn’t completely dispense with the past. Many of the same sensibilities heard in the band’s earlier releases are present here as well but they’ve applied a new coat of paint. They’ve expanded their point of view as well and, though you’d never describe the attitude as wall-to-wall Pollyanna, DigDog’s Homeless Theatre is a thoroughly impressive collection.

Previous Single Review: Darro “Used Me (All Along)”
Next Interview With Darro