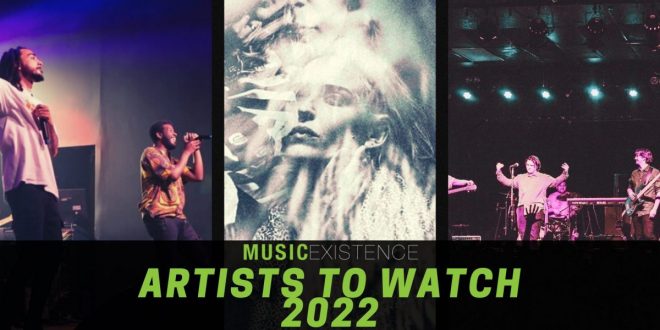 Despite two tough years across the music industry, more and more bands and independent artists have continued to grow and evolve their musical styles in anticipation for a new year of shows, festivals and (hopefully) a back to normal touring schedule. Listed below is Music Existence’s Artists to Watch list for 2022. The following bands have spent the past year growing a local fanbase, hitting it big on streaming platforms, and gearing up for a big year of music ahead.

With the tagline “THE SOUND OF FUN!” indie newcomers Sun Room lift your spirits with their So-Cal surf rock inspired tunes. Formed during the pandemic by friends Luke Asgian, Wyatt Flom, and brothers Indy and Ashton Minnich, Sun Room is a fresh take on a classic style. With bright, punchy chords and fuzzy vocals, their music exudes a lightness that holds transportive qualities. Inspired by their love of ‘60s rock and psychedelia, as well as modern Australian surf rock and the DIY garage rock scene, Sun Room’s music oozes sunshine and joy. Having released two EPs in 2020 and 2021, the band have since brought their music to life with a string of shows supporting Inhaler this past November. While they work on churning out new music, we’ll be grooving to the 10 songs they have released and pretending it’s summer in December.

They only have an EP to their name but somehow Toronto’s Vintage Boring have already begun selling out shows across the city’s most iconic venues. Their sound balances between acoustic melodies and soft electric licks, with the band’s folk-rock vibe filling a void in Toronto’s heavy hip-hop and garage rock scene. By having both a male and female vocalist, Vintage Boring is a certified crunchy granola hitmaker. The band hits the studio next month to record a new EP that fans can expect to hear next spring.

The alt pop/hip-hop collective known as 3409 had a massive year on streaming platforms after dropping consistent releases throughout 2020 and 2021. They’ve landed key playlist placements on Spotify and continue to rack in millions of streams on hits like “Guava,” “Something About Ya,” and “Prom Night.” Despite having massive internet success, Toronto’s strict lockdown measures over the past two years prevented 3409 from playing live and perfecting their onstage persona. But when shows finally did open up this past fall, 3409 was welcomed home with a hearty fanbase of music lovers looking to catch the 4-piece band live. The boys will be dropping a new EP early next year and will continue representing Toronto’s massive hip-hop boom.

Signed to Dan Auberbach’s Easy Eye Sound, The Velveteers join a string of bands and solo artists who found success under the direction of the famed Black Keys frontman. Hailing from Boulder, Colorado, The Velveteers grew up with an Elvis-impersonator dad and a theatre-driven mom who clearly solidified their children’s destiny for the stage. They released Nightmare Daydream in 2021 and found success with singles like “Charmer And The Snake,” and “Motel #27.” They also had the opportunity of a lifetime when they opened for a small band called Guns N’ Roses, ever heard of them? You can catch The Velveteers opening for Rival Sons and Greta Van Fleet on 2022’s Dreams In Gold tour. Tickets can be found here.

British indie band Wet Leg are one of the most buzzed about acts in the UK right now. Founded by friends Rhian Teasdale and Hester Chambers, their unique style turns heads with a mixture of indie pop, post-punk, and shoegaze flair. Most significantly, their lyricism is quite buoyant and forthright, not masking their quirky sense of humor or playful puns. While the songs may be tongue-in-cheek it’s nevertheless a refreshing take on an exciting new effort. Wet Leg is the effortlessly cool new sound we’ve been waiting for and are set to enter 2022 with guitars blaring. Their debut album Wet Leg arrives April 8th.

Ok – so Dead Sara isn’t exactly a new or upcoming band. They’ve been around for about ten years but really kicked off a new era of their career last fall with the release of Ain’t It Tragic. Their magnificent third album flooded rock playlists online and solidified the band as a new name in rock’s current rise. The album is filled with punchy riffs, groovy melodies and a sprinkle of attitude that keeps fans coming back for more. After hitting up all the major rock festivals this year, they’ll continue to tour with Slash featuring Myles Kennedy and The Conspirators starting in February. Tickets can be found here.

Currently sitting No. 1 on Spotify’s Global Top 50 chart, GAYLE exploded onto the scene with her viral TikTok hit “abcdefu.” Now here at Music Existence we’re cautious about jumping onto viral moments from the internet, but after a recent GAYLE show in Boston wowed the Music Existence team, we’re conceived she’s got what it takes to go big. Her dominating stage presence and feisty live show proved that this signer-songwriter from Dallas is in it for the long run.

Brothers Dee, Soloman and Isaiah Radke had been touring the US for years before Dave Grohl discovered the psychedelic garage rock band from Missouri. He featured the band of brothers in his 2021 documentary What Drives Us, and naturally decided to bring Radkey on tour with him and the Foo Fighters. Other than Grohl and company, they’ve opened for everyone from Jack White to The Offspring and have booked music’s biggest festivals like SXSW and Coachella.

What started off as singer Mia Berrin’s solo project in the late 2010s, has now evolved into the gripping rock band that is Pom Pom Squad. Comprised of Berrin on lead vocals, Shelby Keller on drums, Alex Mercuri on guitar, and Mari Ale Figeman on bass, the group are creating buzzworthy hype for their genre-blending styles and powerful hooks. Some moments they channel ‘50s pop and retro ballads, then shift to early 2000s pop punk riffs and murky ‘90s grunge. Their first full-length album Death of a Cheerleader released in June, channeled the likes of riot girls before them combined with the trope of an all American cheerleader. Their recent remake of Nada Surf’s “Popular” has already created an internet frenzy and if they plan to follow this recipe, we’re sure to see a lot more of Pom Pom Squad in the near future.

She’s been writing songs for a while now but the past six months for Holly Humberstone have been massive. She released her EP The Walls Are Way Too Thin to great reviews, recorded with Sam Fender and won a Brit Award as this year’s Rising Star. She’ll kick off 2022 by joining Olivia Rodrigo on the what’s sure to be the hottest tour of the year and plans to release more music for her ever growing fanbase. You can read Music Existence’s interview with Holly Humberstone here and find her full 2022 tour schedule here.