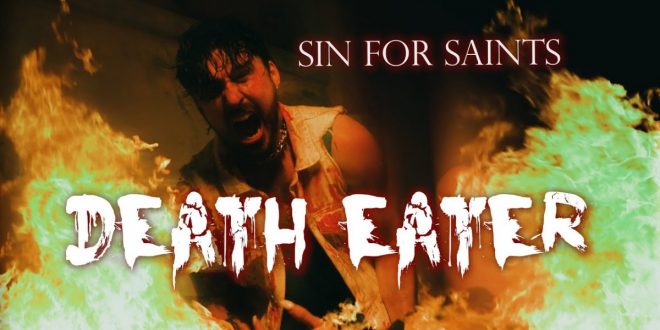 Blood, guts, and ominous danger interwoven with sexual manipulation fill our screen in the music video for Sin for Saints’ “Death Eater,” and if you’re listening to the lyrics and correlating their moodiness with the symbolism of the visuals in this video, you’re bound to appreciate the poetic depth of this band even more than you did before listening to this latest release. Sin for Saints live up to their moniker in this performance and definitely make it evident that they’re not trying to fit in with the mainstream melodies in this genre for anything in the world.

This is a very instrumentation-centric single, but it doesn’t leave the vocal drowning in a lot of excess overdrive. Rather, the vocal is so sharp and angular nest to the beats that there’s never a moment in which it isn’t strong enough to ride over the riffing and make itself the most important element of the track. These guys were meant to play together, and I don’t believe that they would have such an easy time hammering out this song were that not the absolute case. Rock is chemistry incarnate, and Sin for Saints have each other’s personalities down to a science.

Uncompromisingly emotional and heavy in tone, Sin for Saints are setting the bar awfully high for both themselves and their closest rivals on either coastline in the new single and music video “Death Eater.” This is a well-rounded composition, and though I feel like the industrious cosmetics and heavy metal attitude of the players is important to understanding their aesthetical goals as a unit. “Death Eater” is an introduction to what they can do when they’re operating at full power, and from my perspective, they’re not even done evolving to what they could be with nothing to stop them from pursuing their greatest ambitions.