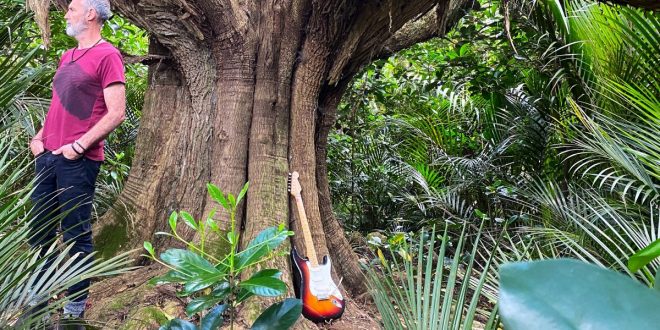 Having relocated from Melbourne, Australia, and settled into an off-the-grid permaculture farm north of Auckland in homeland New Zealand – singer-songwriter Brian Baker has gotten busy setting up a new studio space and recording this new song “Everywhere You Go”. The song has a wonderfully laid-back and sincere sentiment with some excellent guitar work. It deals with separation, that while in these times often we can’t hold our loved ones or be in their physical presence, we hold them in our hearts and minds.  “I left family in Melbourne to set up back home in New Zealand,” explains Brian. “This song is simply an expression of the accompanying emotions and I’m thinking that pretty much everyone can relate to those in some way or another.” Brian has also turned his crafty art skills to create a simple lyric video with an organic vibe. Suitable for the song and from where it is – straight from the heart.

Listen to the single on Spotify or watch on YouTube below:

Brian Baker is a singer/songwriter/producer with a passion for the environment and Buddhism, themes evident in his songs, music, and videos. He plays guitar, bass, piano, and keyboards, drums, and percussion, sings, and relishes his production duties, on his own songs and other artists’ works.

Brian is passionate about songwriting and is a student and big fan of Pat Pattison. (A professor at Berklee College of Music, teaching lyric writing and poetry.) After moving to Australia from New Zealand in 1980, Brian performed with many Australian bands, securing a Sony recording deal with “The Ones”. Around this time he scored his first song placement on the second UnCanny X-Men album, (Australian rock act) with the song “Colour Your Answer Blue”.  After writing and recording the top 20 single “Heart” with The Ones (released on Sony) he went on to co-write the score for the movie “Rikki and Pete” with Eddie Rayner from Split Enz/Crowded House. Eddie and Brian continued to work together as “The Makers”, releasing 2 CDs through Warner’s East West label, including the hit single  “Big Picture”. Together with drummer Michael Barker, they toured Australia and New Zealand with the B52’s and appeared on TV shows like MTV, Countdown, Hey Hey It’s Saturday, Tonight Live, and The Midday Show.

Brian signed a deal with Fable Music/The Image Label to produce library music which continues to be used worldwide. He’s written and recorded radio and TV jingles, short film, and documentary scores. He has performed at countless shows and is writing and recording songs and music at the highest level of his profession.