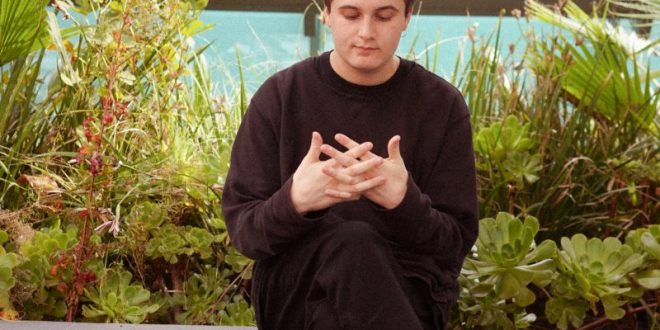 Many artists like to stay in a box. Folk artists play folk. Pop stars sing pop songs. But, there are those rare artists that can skip across genres while still sounding like themselves. Brooklyn’s Richard Orofino is one of those artists. His newest EP, Chimaera, showcases his ability to shape-shift musically, sometimes even mid-song!

Orofino has collaborated with a diverse group of artists in NY, LA, Nashville and London including Evan Voytas (UPSAHL, Loyal Lobos), Isaac Flynn (Hembree) and John Carroll-Kirby (Solange, Connan Mockasin). After discovering the art of production in 2013, he has been able to fuse his strong artistic vision across all aspects of being a modern day ‘singer-songwriter plus’ offering. And the results have culminated in the songs on Chimaera.

Opener “Fake Me” is an amalgamation of pop music through the decades, with slapped bass and thick, swirling pad synths. “Good When I Lie” grows from a soft, emo ballad into a sweltering, screaming rock song. Lead single “Scratch Off” is a modern reinterpretation of 90s artists like Elliott Smith; ear-wormy melodies couched inside deconstructed drums and urgent acoustic strums. “Wanna Say” and “Need Some” show Orofino’s ability to write just incredible pop songs. You won’t find a melody that won’t get stuck in your head on this EP.

Orifino recalls that this EP dealt with themes of loneliness, identity, and change. It’s an accurate reflection of 21st century malaise – the isolation of the influence age. You’ll feel seen when you give this EP a spin.

Listen and stick around for an interview below!

You cover a lot of ground sonically on this EP. Was it a challenge to make these songs flow together?

I think that was actually a really fun part of creating it. Some songs felt worlds apart, but being able to tweak the tracks enough to where I feel they could live in the same world was exciting.

You’ve worked in a lot of cool cities. Do you have a favorite studio?

I don’t think so, I usually find myself best suited in more homemade feeling spaces. I always worked from my bedroom so sometimes I feel more uncomfortable in larger professional studios.

You’ve got a fantastic voice, and it really shines through on this record. Were you intentionally trying to wrote songs to show your range and power?

No it definitely wasn’t my goal when writing the songs. I think my main thing was getting really solid songwriting that I get were honest, I’m so glad you found them naturally fitting my vocal space nicely!

I’ve been working on a ton of new music which has me extremely excited to perform and release. I’ve been working with many new people as well, and finding so much inspiration from them, especially from people with different musical backgrounds. Their their impact is definitely shining through on the new tracks.

Stephen Vicino is the founder of MusicExistence.com. He created this site to give talented musicians a voice and a way to be discovered.
@@svicino
Previous Seattle’s King Youngblood Ushers in a New Seattle Sound
Next New Single From Mitchell Royel is an Ode to Self-Discovery, Resilience, and Inner Power – Ghost in the Machine