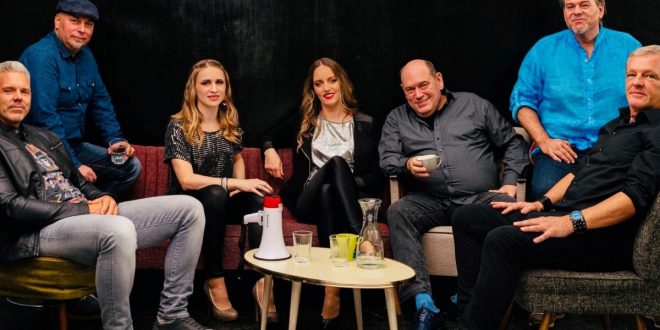 Immerse yourself in a world of love, beauty, loss and the vision of a better world – with heartwarming own songs, staged with fiery percussion, rocking drums, epic piano, spherical guitar sounds, unique harmonic voices and a grandiose light show. Let yourself be inspired by the emotions that our songs with their profound lyrics will arouse in you. A soft shine – the tone light from GENTLE GLOW. We sat down with the Austrian band for a one-one-one exclusive interview…

Tell us about Gentle Glow. Who and what is it, and how did you come up with the name?

Originally our band formed in 2017 as Jasmin & Roman. One night in September we were watching the sky, recognizing the gentle but powerful glow by the planet Venus, so we decided to write music together as GENTLE GLOW. Instantly discovering a special uniqueness in our songs combined, we enlisted a talented lineup of studio musicians for our debut record “Heroes in between” in 2018, introducing the first listeners our compositions through a set-list of 10 songs on our first album.

Afterwards we decided to expand our band to get more potential for our songs – the full lineup of GENTLE GLOW grew to officially include the remarkable contributions of F.H. Novy (Bass), Chris Schrom (Drums), Peter Cone (Percussion), Alex Hauer (Keyboards/Synth) and Lisa Duschet (Backing Vocals) alongside Jasmin Neuninger (Vocals/Piano) and Roman Schrank (Guitar/Percussion) in our return for 2021.

“Last Call” is your most recent single. Please tell us about it. What is the song about?

With our new single “LaST CaLL”, we wanted to draw attention to a cutting-edge topic:

It is five to twelve when it comes to climate change and in addition to the careful use of our resources in our everyday lives, we also want to use our music to point it out.

We skillfully packed our message into a modern dance beat. We don’t want to come along with a raised index finger, we want to get our message across in such a way that it arrives at the party in the club and is fun at the same time.

We’ve embraced a colorful Pop sound – our own design. It’s infused with positivity & meaningful messages designed to bring, love and good vibes to a world full of listeners, uniting people from one side of the map to the other. Being from Austria today is no hindrance to produce music and to promote it all over a globalized world.

We record our songs in Austria, get our final mix from a German studio and while the mastering comes from very good studio in New York, the first remix gets finished in the Netherlands.

Of course we love our country and its nature very much, which sometimes inspires us when we write songs.

Your live shows feature an impressive light show. Who comes up with the concepts for that, and is it hard to pull of in a live concert situation?

The concept for our light show is written by Roman, of course always in cooperation with our lighting technician. Our visionary messages should be a reflection of our radiant sound – we call it “the tone light from GENTLE GLOW”.

What is the ultimate goal for the band?

create songs capable of moving the hearts & minds around the globe. We know the power of music can unite people together through a genuine vision of better tomorrows for one and all – so this is our goal – inspiring our listeners and fans into positive mood and action.

How has COVID and the pandemic affected you as a band, and on a personal level?

All our scheduled shows were affected by the outbreak. Our concerts had to be postponed because of COVID-19, but of course we hope to be able to perform live again very soon.

We are also shocked by the severe divisions in society which came up the last two years. We think that it’s only possible to manage the pandemic in Europe by staying united and preserving the essence of fundamental rights of people.

What is next for Gentle Glow?

Well, as mentioned we can’t wait to meet our audience soon again. Meanwhile we are working on new songs that speak volumes on behalf of the need for change.