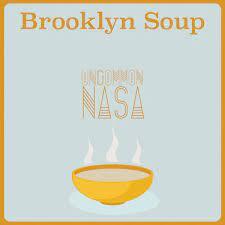 Slowly unfolding from the silence like a clandestine threat we don’t acknowledge until it’s too late to do anything about it, “Brooklyn Soup” has a stealthy ominousness to its intro that is unmistakable and instantly likable. Even before Uncommon Nasa starts to rap, it’s clear that we’re listening to something heavy in this track, and his words only add to the weight. He’s swinging big charisma in this piece, and while some might be content to do as much with verses alone, Uncommon Nasa is using every square inch of sonic space in this mix to make a declaration of war on the mainstream.

Rather than working off of the beat as a point of structure in this single, Uncommon Nasa is slicing away at the bassline like it owes him money, demanding a response from the percussion that never comes as hard as it seems like it should. The minimalism he’s surrounded by in this performance is rather frustrating to his execution, but I get the idea this is all intentional – he wants us to hear him up against a wall per se, and in building as challenging a course as his skills can handle, he’s able to really showcase his best talents without sounding egomaniacal about it.

There’s been a lot of inventive hip-hop debuting in 2021, but I don’t know that you’re likely to find another single packing the punch “Brooklyn Soup” is this month. Uncommon Nasa takes a page from the old guard in outsider rap here, but his unconventionality results in an experimental edge that most of his contemporaries would either kill for or do anything to keep out of their sound – the latter being rather silly, considering how well things pan out in “Brooklyn Soup.” Uncommon Nasa is well on his way to breaking out, and this single celebrates his rise.