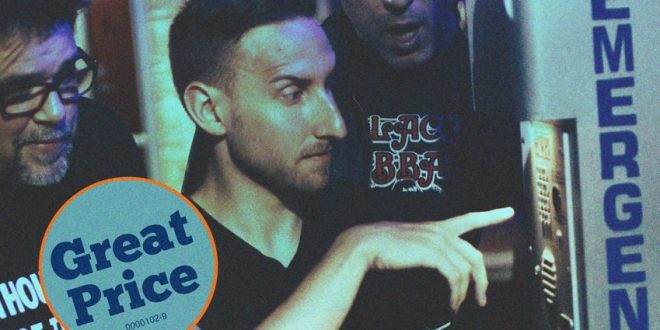 Elsewhere’s new single “Call You Out” is the latest single from the Boston-based three piece. They’ve scored several chart successes before now and have built a reputation for producing serious yet entertaining songs speaking to our everyday experiences. The band’s earlier single “The Pledge” faced down the horrors of Alzheimer’s with an equal measure of respect and artistry. “Call You Out” has decidedly more mundane fare than its predecessor but Elsewhere nonetheless pulls this track from realities many, if not all, can connect with.

Lead singer, guitarist, and songwriter Michael Aroian’s writing about the perils of bad bosses in the workplace sounds almost like a call to arms. The exhortative qualities of the song are going to make it a popular live track, without any question, but there’s more going on under the surface of the song. In essence, it is a song resolutely about what it means to be human and deserving of basic respect. There is a light punk rock spirit burning in the heart of “Call You Out”.

It is a good pairing with its pop rock tendencies. The vocal influence of bands such as Cheap Trick comes across in the singing and, especially, the vocal arrangement. Elsewhere doesn’t go full on in that direction, however, and roughens the vocal enough that it will earn any rock fan’s respect. It gives the song an added punch, as well, in this context and the superb production highlights the singing without ever losing the complete band sound.

The rhythm section playing is essential to that sound. Bass player Kevin Swaluk and drummer Adam Soucy provide able support for Aroian’s guitar work yet distinguish themselves with superior musicianship. Soucy sets an indelible tone for the song with his work on the kit. It’s as dexterous as it is muscular, yet there is no steamrolling the listener or other instruments. It has a secure place in the mix.

Fans of the band or single in the Boston will have an opportunity to catch the band on December 14th at the Paradise Rock Club. They’ll open for Our Lady Peace on their Stop Making Stupid People Famous tour, but prospective concertgoers will need to have certain things ready for the 7pm showtime. The venue abides by the Massachusetts state requirement for all attendees to wear masks as well as presenting either printed proof of immunization at least two weeks old or else printed proof of a negative COVID test at least 72 hours prior.

It’ll be a rollicking evening for sure. There’s little doubt that Elsewhere will unleash this roaring track on their listeners and it will hit live attendees with a wallop. Translating this track from studio to stage won’t require much work and nor will “Call You Out” lose any of the power present in the song. Let’s hope it’s the first of many such appearances for this band, but let’s hope we hear more songs from them in the near future. Elsewhere’s a band well worth putting your faith in.