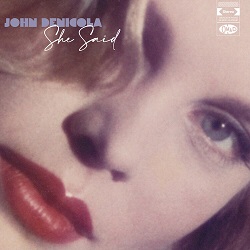 John DeNicola’s second solo album “She Said” is the longtime songwriters second release in less than two years after working out of the spotlight as a songwriter for over a quarter century. His spectacular success as a songwriter, co-authoring decade-defining hits such as “(I Had) The Time of My Life” and “Hungry Eyes” from 1987’s Dirty Dancing soundtrack, didn’t quench DeNicola’s yearning to helm his own songs. 2019’s The Why Because presented DeNicola re-cutting songs he’d first written or co-written for others, but the new album, excepting a handful of covers, features songs specifically included with DeNicola’s voice and vision in mind.

“She Said” brings us into the album with immense skill. There’s no doubt after hearing this song DeNicola has a firm grasp for how to open a release in attention-grabbing fashion. The same influences that helped shape his hits mentioned earlier in the review is woven into the DNA of this song as well; you hear it in the lush neo-R&B and soul backing. You hear it, as well, in DeNicola’s quaking vocal sensitivity. He effortlessly hits upper register peaks without ever surrendering nuance. It’s a hell of an opening.

“High” is one of the best commercial-minded tunes on She Said. Its seductive melodic charms are apparent from the outset and it will connect with all but the most narrow-minded of listeners. Many will appreciate and low how it easily invokes its low-key atmospherics. It moves on you like a slow caress. “Float on Hope” has similar melodic elegance. DeNicola has a real skill for crafting simple yet beguiling melodies he has the good instincts to embellish with artful touches. The slight variations he takes for this song’s chorus is a good example. It has a topical message and that may put off some listeners, but it’s a honest reflection of DeNicola’s personal interests.

“Morning Dew” is one of the album’s covers. The 60’s folk standard is a track DeNicola, especially with his Long Island upbringing, is undoubtedly familiar with, but he spins it in a personal direction rather than just regurgitating his dim memories of the past. It’s another topical track, like its predecessor, but possesses rare timelessness. “Battered Cloth” is one of the album’s best collaborators. DeNicola works with renowned lyricist Keith Reid, co-writer of classics such as “A Whiter Shade of Pale”, and it rates among the best moments on She Said.

DeNicola invests his vocal with precise yet deeply felt passion, never the throat-shredding kind, but instead the hushed and emphatic sort where every syllable is life and death. It’s a reflective song par excellence, but never inert – you can hear and feel life lived in each line. The images are on point and often quietly heartbreaking. “Out Day Will Come” is one of the album’s more unique moments. Bringing together its comforting yet exhortative lyrics with the colorful electronic driven backing is a curious match. Its effectiveness is obvious, however. John DeNicola’s day has come before, but She Said makes the strong case that his day has come again.

Previous Calussa: From Brothers To Music Duo To Label Bosses
Next Girl in Red shares video for “I’ll Call You Mine,” performs at MTV European Awards