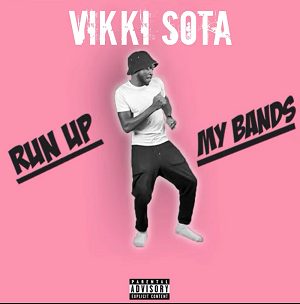 Modern hip-hop celebrates hybridity far more than it does purity, and if you’re not quite sure what I mean, just take a look at the buzz rapper Chukwudi Victor Otubelu, known as Vikki Sota, has been attracting this season. Sota’s star single from his upcoming EP Genesis, “Run Up My Bands,” and its accompanying music video sport a crossover trap sound that is debatably more indebted to the experimental sounds of the mid-2000s underground than it is anything on the cutting edge of pop today, but the retro vibes are entirely deliberate. The way this player utilizes them, there’s scarcely a moment in which we don’t feel like we’re living in the moment with his lyricism, and through his epic delivery, we’re constantly made to experience the urgency of his emotionality without it sounding like an overindulgent performance.

One of my favorite things about Vikki Sota as a rapper is that he doesn’t lean on the beat when it comes to hammering out a line – truth be told, I think his vocal is responsible for crafting the groove in this track a little more than the drums or the bassline are. He’s got such a formidable presence behind the mic that it would have sounded downright excessive to put any more of a backend into this mix; he wants to bring us a narrative through so much more than verses alone, but rather than relying on the filler that a lot of his peers would, he’s sticking to the cut and dry and developing a more surreal sound as a result.

This bass is never a buffer between the percussion and the vocal, but instead a melody-defining component of the hook that feels the most conventionally trap on paper. Scarcely does it ever sound as though Sota isn’t owning the verse over the instrumental elements he’s straddling, and where some might have been quick to present a more humble chorus against this type of a beat, I admire his adventurousness in this performance. I don’t get the impression that this is a rapper who isn’t comfortable going after something a little more ambitious than what his competition is, but instead, someone who wants to get as much out of a simple structure as he can, which he masterfully does in “Run Up My Bands.”

Those who really appreciate the brighter side of modern rap and trap music need to look out for more from this talented player in the very near future, as I think Vikki Sota is sitting on a winning formula in this single I’d like to see him carry forth in additional releases. The remix potential is undeniable, but as it stands in its standard, non-radio edited version, I believe “Run Up My Bands” is a good depiction of what this guy can do when he’s just being himself rather than trying to be more provocative than the artists he shares a scene with. This is a compelling moment in history for hip-hop as a genre, and indie rappers like Sota are definitely the reason why.