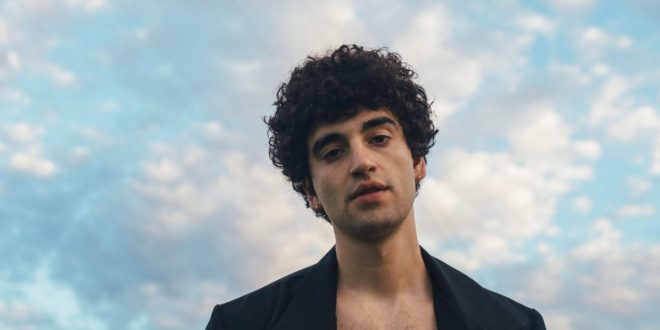 Los Angeles-based singer/songwriter Adam Melchor returns today with the feel-good anthem, and video for, “Hold on for Dear Life,” a collaboration with Tennessee troubadour Briston Maroney. With lilting harmonies and lush instrumentation that evoke ’60s icons like The Monkees and The Byrds, Melchor’s latest single is about leaps of faith and enjoying the dizzying rush of new experiences.

“It’s about taking the plunge, jumping into the unknown,” Melchor says of the duet. “Even if you’re flying by the seat of your pants, sometimes the scariest things are the most fulfilling.” That sentiment is expertly captured in the intricate chorus and accompanying video as the two plunge into the deep end of a pool. “Sometimes I feel like the kite and sometimes I feel like the hands that hold the strings too tight,” the duo sing over jaunty guitars and glittering piano. “Hold on for dear life.”

It turns out the track is the result of a (mostly) happy accident. Melchor literally bumped into Maroney on the streets of Nashville and they decided to record together. “I remember being so stoked about it that I accidentally knocked Briston’s phone over and smashed his screen,” he says. Replacing Maroney’s cell is a small price to pay for the winning addition to Melchor’s discography, which has grown significantly over the last year.

“Hold on for Dear Life,” follows fuzzy pop-rock hit “What a Damn Shame” and the Lennon Stella-assisted “Light Year,” which has amassed more than 5 million streams. Those songs dropped after the arrival of the 25-year-old’s debut Warner Records project, Melchor’s Lullaby Hotline, Vol. 1., which includes 12 of the 44 songs he texted and emailed fans in 2020 as part of a project during lockdown.

The breakout artist is currently supporting his debut project and spate of recent singles on a headline tour of North America. Currently underway, the live extravaganza boasts 30+ dates including stops at hallowed music venues such as Los Angeles’ El Rey Theatre and the Music Hall of Williamsburg in Brooklyn.

With a rapidly growing fanbase and a knack for insightful, intricately arranged pop songs, Melchor’s ascent seems destined to continue in 2022.