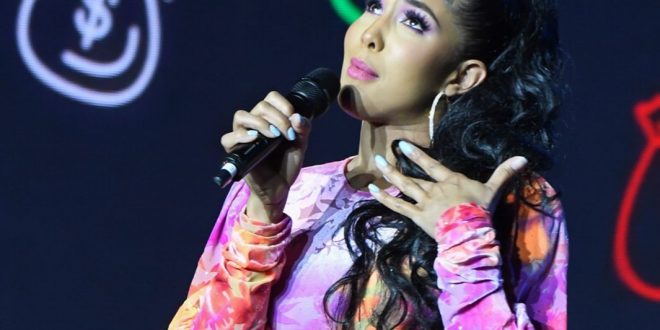 The Haitian artist used her most recent single titled “Mawozo” for a high-carat presentation, in which she was accompanied by an incredible group of talented dancers.

Sarodj as always overflowed with all her energy on the great stage of the Sambil events center, in the Dominican capital, and offered a vibrant show.

After her performance, she thanked the audience for the receptivity and remembered when she was on a stage like that one competing for the title of Miss Haiti, whose crown she won in 2010.

The singer has had important participations so far this year. She was presented at the Guaya Guaya Festival in Orlando, at the pre-show for the Soberano awards, at Summer Sunday in Puerto Rico and more recently at the Miami Carnival.

The interpreter also of “Una noche“, “Only fans”, “Wants to eat me” and “A friend”, among others, reported that in the next few days she will launch the single “Wacala“, a song produced by the Grammy winner Al Cover .

“Wacala” is another promising single that stands out for the artist’s originality by merging rhythms and languages.

Sarodj Bertín has made important collaborations in music, and has been noticed for bringing her culture and essence to each one of her songs.

For her first single she managed to team up with the successful Dominican artist, Mozart La Para.

Sarodj leads the TikTok platform, and has gone viral with several of her singles, in addition to the 1.8M fans she has on Instagram.

As a result of the earthquake that occurred in her country on August 14 of this year, she presented a very special song entitled “Haiti”, which emerged while the artist was working in the affected areas to help her compatriots.

Sarodj Bertín also worked with numerous organizations for the welfare of her country and as a result of her philanthropic work for her foundation “Sarodj for a purpose”, she was awarded by the “African Oscars” (NAFCA) in 2013, and the “Humanitarian Award“ in the “Motion Picture Association of Haiti“ (MPAH), among others.

In addition, she was recognized by USA Today as one of the nine most powerful women who positively impact society.

Previous How to Date a Musician?
Next Dashboard Confessional announce new album; share first song “Here’s To Moving On”