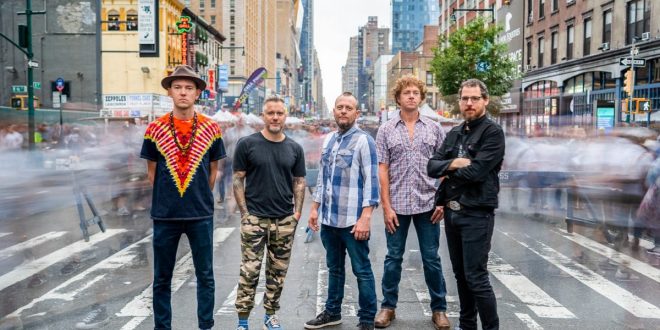 Hot off the heels of the new record announcement made last month by Grammy and IBMA award-winners The Infamous Stringdusters, the band is pleased to also announce a January through April tour of the same name. Truly coast to coast, the band will kick off on Jan. 20 in Albany, NY with good friends Greensky Bluegrass, touring through most of the east coast and into parts of the midwest and southeast. Dustbowl Revival will hop on towards the end of March to make several stops in California, wrapping the 4 month tour in Seattle, Washington on April 9th. Pre-sales are, as of today, on-sale for headlining dates. General on-sale starts Thursday, Nov. 4 at 10 am PT. Please visit thestringdusters.com/tour for more information and to purchase tickets.

Toward the Fray, the band’s first release of original music since 2019’s Rise Sun, will be released on February 18th, 2022 on Americana Vibes via Regime Music Group. Fans can now listen to the first single, “Toward The Fray” right HERE and digitally pre-order or pre-save Toward the Fray now HERE. The Dusters also designed a plethora of new merchandise to celebrate both the tour and release of Toward the Fray—including, but not limited to, a Stringdusters North Face jacket, limited edition colored vinyl, and an adorable Toward the Fray teddy bear.

Want to ring in the new year with ‘em? The Stringdusters will be returning to The National in Richmond, VA for a 3-night New Years Eve run. The band will be joined by special guests Sam Bush on Dec. 30 and Keller Williams on Jan. 1, while the Dec. 31 show is billed as a 3-set “Evening With…”. Tickets are currently on sale through AXS.com.