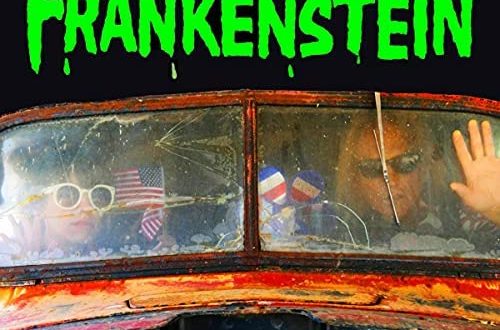 It’s AV Super Sunshine’s world; we’re just living in it. Few performers of today burn as bright as this. A new AV Super Sunshine release doesn’t mean just a new song; the writer, performer, and auteur never put out singles without a video and/or multiple remixes accompanying the core track. The videos are always much more than shallow eye candy. He doesn’t write those sorts of songs, but his videos are invariably striking visual narratives, fragmented like his lyrics are sometimes, yet coherent. The video for his new single “Frankenstein” is no different.

His artistic admiration for Lady Gaga inspired the track. AV Super Sunshine’s love for the renowned singer, songwriter, and actress serves as a springboard for the track’s writing, but it’s far from imitation. His boisterous musical style is as robust as ever with a powerhouse vocal at its center, but the striding percussion gives it great urgency. Bradford’s guitar lays jagged exclamation points throughout the track, but the song has overall polish rather than an abrasive sound.

I am a big fan of his vocals. If AV Super Sunshine has ever had formal vocal training, you cannot t tell. He doesn’t sing with any of the stiffness or bloodless precision you often hear from such vocalists but, instead, tackles the words with verve. It simultaneously checks all the technical boxes. Sunshine’s working with producer and musician Michael Bradford once again and he certainly brings a lot to the songwriting table, but I hear AV Super Sunshine in the driver’s seat. He stamps his personality on every element of the song.

Bradford’s production, however, has defined much of AV Super Sunshine’s sound. Great collaborations such as this are often distinguished by their seamlessness – you can’t tell where one contributor ends and the next begins. It never steamrolls you, but there’s immediacy from the first. It’s a track where the instrumental action seems to take place inches away from you rather than the product of a remote studio experience.

The phantasmagorical use of color and motion throughout the video is another strength. AV Super Sunshine’s partner and collaborator Philomena Victor shares responsibility for the cinematography and the outstanding visual acumen she shares with AV set them apart from many other musical outfits. I have been impressed from the start by his fusion of several different disciplines into an overall entertainment package.

This is an artist who knows how to build a connection with music fans. Casual listeners need not apply. The prototypical AV Super Sunshine fan will be hardcore music devotees a little outside the mainstream who believe in its redemptive power. It is music about many “things” and transformation is one. “Frankenstein” and AV Super Sunshine’s earlier songs transcend our every day lives and take us to another place.

Its inviting sound and demeanor invite us to tag along. Lady Gaga’s relationship with her fans seems to be something AV Super Sunshine aspires to. The tone of “Frankenstein”, in all areas, supports this. I believe it is among his best singles yet.

Previous Album Review: Pretty Embers “Under”
Next Who is Champ Kennel?