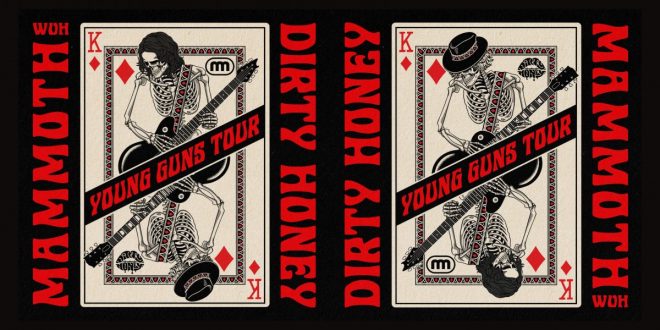 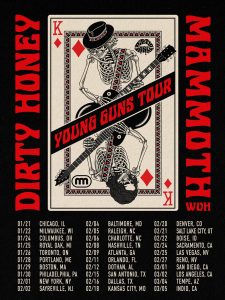 There’s no doubt that Dirty Honey has proven themselves to be a powerhouse in modern day rock n’ roll. After being the first unsigned band to top the Billboard Rock charts with “When I’m Gone,” the band followed up that success with the launch of their explosive debut LP Dirty Honey. They’ve opened for everyone including Guns N’ Roses and The Who and continue to impress with their electrifying live shows and captivating performances. Now, the band will team up with Mammoth WVH for their co-headlining Young Guns tour launching in January.

Fronted by Wolfgang Van Halen, Mammoth WVH impressed the rock community this year after the release of their self-titled debut album back in June. While the album was written and performed solely by Van Halen, Mammoth WVH’s live show sees the addition of a full band, including touring guitarist Frank Sidoris (Slash feat. Myles Kennedy and the Conspirators) and drummer Garrett Whitlock (Tremonti).

In a statement, Dirty Honey frontman Marc LaBelle said, “People who come to our shows are going to see two bands who are looking to prove that rock’n’roll is definitely very much alive and well. We both carry the weight of that on our shoulders, and there’s a lot to prove.”

Tickets go on sale Friday November 5th at 10am local.

26 The Danforth Music Hall, Toronto, ON