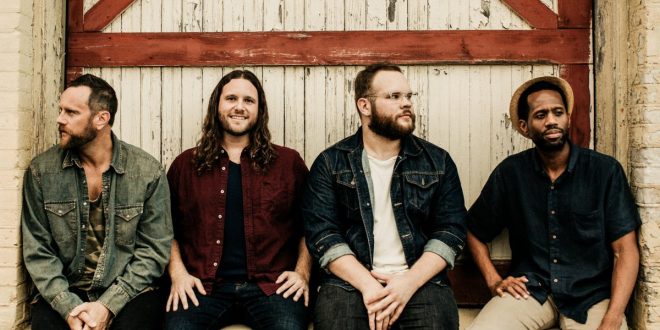 Packing a Southern Rock/Pop, Blues & Americana sound with positive, family-friendly message, some describe Josh Gilbert Band as a splash of John Mayer Trio with an upbeat tempo, a kick of Stevie Ray Vaughan, and a dash of soulfulness of Gary Clark Jr. Josh has his own unique sound, however, influenced by guitar-driven acts of all different decades and styles. Hailing originally from Chattanooga, TN, Josh has toured across the U.S. and Canada for over 12 years, with over 1,000 performances to date. The Josh Gilbert Band is a collective of members, and have included a network of friends, family & working musicians through the years — who have stuck with him through thick and thin.

“Sweet Little Place”, Josh’s 2019 single, is about staying together as a family, even when times get tough — a real story about taking risks and challenges in life as a family unit — and no matter where life takes you, we’ve always got a sweet little place together that we call ‘home’. “Outside The City” is part of a 2019 EP, released under the same name, and is more of a blues-rock endeavor inspired by Josh’s early life in the backcountry of TN, growing up near the Smoky Mtn. National Park. In 2020, Josh released 2 more singles “Hold Me Close” and “Slow Drivin’ Train”, which both venture further into the Blues/Rock realm.

We caught up with Josh Gilbert, and he was kind enough to answer some questions in this exclusive one-on-one:

The band is obviously named after Josh Gilbert. Who is Josh Gilbert, as a person and as a musician? Give us the background.

I was born in 1984 in Tampa Florida, but my family and I moved up to the east Tennessee small town of Maryville just outside of Knoxville when I was around three years of age.  I was raised in a religious family and learned to sing in school and in the churches I grew up in. Around age 11, my parents divorced, and both relocated not long after to southeast Tennessee, Chattanooga. area.  Just after turning 13, my mother gave me my first guitar as a Christmas gift, and something sparked within me — I became obsessed with the instrument and writing songs. All through high school I taught myself to play guitar both acoustic and electric, as well as singing classical music in the choirs and ensembles at the religious schools and churches I was brought up in.    It was during this time in my  life that I formed my first official band with my younger brother, Matt Gilbert and our younger cousin, Ben Phillips. I initially coached Matt and Ben on playing bass notes and banging percussion with two hands, however they both quickly excelled on their own, teaching themselves how to play bass and drums at their middle school ages.  We called our band Jettison Never; an alternative-rock trio with a ‘do-or-die’ attitude.  We made our new found love for music an outlet to deal with shared family hardships including death and divorce.  Not only had both of our family parents gotten divorced at the same time, as well as deaths on both sides of the family, but I had previously attempted to form a band with a couple of schoolmates at his middle school, yet it did not work out.   Unfortunately, both of those dear friends were killed in motorcycle accidents several years later.   As two brothers and cousin, fueled by unfortunate disappointments in our own life and inspired by the stories of many others, we went on to write music, perform and tour as Jettison Never for the next decade (around 1999 until 2011).   During this time, we toured the United States hitting every major city and playing every venue we could, determining to make a name for ourselves as a live act, doing hundreds of shows a year, with several years toward the end of our career doing 200 to 250 shows per year.  We  were influenced by big alternative acts who also toured heavily such as Mute Math, Switchfoot, Foo Fighters, Kings of Leon and U2.     Despite Jettison Never’s determination and efforts, we were never offered much opportunity, or achieved much commercial success. After several years of touring the nation, traveling to the West Coast to work with a development team in hopes of landing label deals, two full length albums, a host of EP’s,  and being dropped by a potential deal with Atlantic records, coupled with the economic downturn of the US economy during this time, we finally called it quits in absolution when a tornado outbreak happened in 2011, hitting east TN — destroying our van and quickly bringing all performances to a halt.  My brother and cousin put music on hold for a bit, however I was left at a crossroads:  whether or not to continue doing music on my own, or pursue another type of career. I spent the rest of the year preparing for either decision, but by the time  winter of 2011 came around, I found I had already written a fresh batch of new songs and I recorded a debut full length solo album, along with the help of my brother Matt.   From that time on I toured up and down the East Coast and the Midwest, as well as eastern Canada as a solo artist and band under my name.  Josh Gilbert Band has incorporated a small network of different members, including family such as multi-instrumentalist brother Matt, as well as many different friends.  I have a wife (Jennifer) and three daughters (Indigo, Amethyst, & Lydia) and I continue to make a living to this day as a full-time singer/songwriter, band and performer-for-hire.

The band is from Chattanooga, TN. How has being from that part of the country influenced your sound?

Unfortunately Chattanooga doesn’t have much musical history or culture (as opposed to the likes of Nashville), and despite being in the South, I didn’t grow up listening to or liking genres such as blues, classic rock or country — ‘American’ styles of music.   I grew up performing Classical music and church music, and was sheltered from most ‘secular’ music as a child.  But when I became a teenager, I learned to play guitar and formed bands in high school, college and after that which were more grunge/alt/rock/emo-rock, and wrote songs in that genre from the late 90’s through the early 2010’s — a sort of musical ‘rebellion’ if you will!     As I grew older, I discovered the ‘soul’ behind older American musical styles and artists which I began to realize actually influenced the majority of modern music styles (folk, blues, etc….).  This reality sparked fascination in me and I took a turn in my musical journey into learning about older music up until this day, and have grown to appreciate so much of what music came out in decades before us (particularly blues, southern rock, etc…); especially music that in past decades (60’s, 70’s, 80’s) was so guitar-driven!   So now I have become a student of the classics:  blues and folk, and rock n’ roll music all over again!

Who has influenced your blues/rock sound?

Initially, because I had grown up with an ‘Alternative/Rock’ background, particular bands such as U2 have always inspired me; specifically I became fascinated with their album “Rattle & Hum”, which was their take on ‘American’ music influences (blues, gospel, folk, etc..).  That’s what opened the door into listening and studying the classic rock & blues players; Eric Clapton, Stevie Ray, BB King, Eric Johnson, Allman Bros., CCR, Bonnie Raitt, etc… and on and on.  Of course I love the revival of modern blues acts, like Marcus King, Gary Clark Jr., Tedeschi Trucks, Joe Bonamassa, and a couple of lesser-known favorite players are Robben Ford and Kirk Fletcher.  I’d say my vocal aspirations are not only inspired by U2’s Bono, but also the likes of Indie acts like NeedToBreathe, Ray Lamontagne, and Johnnyswim.

We actually haven’t done too much livestreaming at all, we’ve been pretty slow to adapt ha ha.  We did a few concerts in 2020 in March, April, and May with mixed results (they sounded ok).  However, the ‘in-person’ live performance schedule picked back up by July of 2020, and it’s been very busy we’ve had lots of engagement since then!

Tell us about your new music, and what fans can expect from the band in the future.

Most of what we do revolves around live shows and we debut a lot of new original music at concerts  instead of stream recordings.  Because of the costs and time of recording and mixing new music, we don’t get around to releasing a lot of material each year online.  However our next project is a Single release called “Last Goodbye”, which is a song about saying ‘good-bye’ to a loved-one on their deathbed; and we will also be finishing a full-length Album to be released in the beginning of 2022.

The band performs a lot of shows primarily throughout the southeast, correct? Tell us about life on the road. Favorite parts? Least favorite parts?

Actually we perform all over the East Coast and Midwest in addition to the Southeast.  This year’s been very busy in particular – I’ve put 25,000 miles on our Tour van since May!   We’ve hit lots of Georgia, Florida, South Dakota, Iowa, Missouri, Texas, Illinois, Ohio, Indiana, etc….. We stay mostly east of the Mississippi river, because everything practically doubles in cost on the West Coast!  But hope to make it back there someday soon.  I actually love driving and seeing the country; it’s tough doing an 8 or 10 hour drive in 1 day – but I enjoy it!  My favorite thing is meeting new people and getting to know their stories. We love coming to smaller or mid-sized towns, where we feel like we can really get to know people, especially if people are there for the music.  I think for me, where I feel most ‘dialed-in’ with music is ‘live’ — with people in a physical environment.  The current digital livestream platform, or even just music videos or studio recordings, I have never gotten comfortable with in our current entertainment world — I just don’t fit in.   I just love connecting with people in-person and drawing them in to an experience.  And even though I have a story to tell, I love to hear others’ stories too!    The tough part about life on the road is you always lose sleep, and typically I’m driving us back home to TN all-night from somewhere after the last gig.  But since we do mostly ‘long’ weekend tours, we get a chance to recoop during the week when we get back.

If you could perform any place in the world, any venue, where would it be and why?

-Probably Red Rocks Amphitheatre in Colorado, or Royal Albert Hall in the U.K. — they are places that so many famous and amazing musicians have performed!   But honestly, I really enjoy some of the places I already perform at immensely.  I am a regular performer at an amazing Amusement Park in Gatlinburg, TN on top of a mountain called ‘Anakeesta’!  From the stage, I have an amazing view of the Smoky Mountains National Park every time I play!  I recommend anyone taking a trip to visit that place!

BONUS: Any last words of advice for up and coming musicians, that you wish someone would have told you?

I’d say figure out ways of adapting, and not being afraid if your music isn’t in front of a ‘captive audience’.  Be open to offering your music as a service in any kind of way you can think of as an investment– offer your music and/or performance to all kinds of folks, clients,  and connect with many different organizations and businesses outside of the box — this attitude and strategy may get you the investment until you can fund your ‘work of art’ fully by itself!  🙂