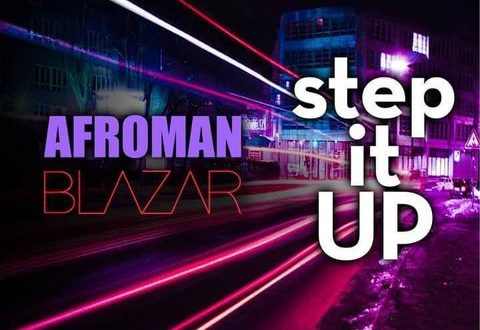 Afroman and BLAZAR Take a Fresh Approach for ‘Step it UP’

To end 2020, Afroman surfaced on ‘WHOLEthing’ for his Cosmic Wire debut with label boss, BLAZAR.  A year later their magic in the studio is well alive and is put on full display for the funk driven, ‘Step it UP’ via Cosmic Wire / AntiFragile.  Now officially on the Cosmic Wire roster, Afroman and BLAZAR are finding the perfect combination between the present and past by staying on the frontier of creativity and standing on the foundation of veteran-ism.

Wasting no time with a hard-hitting, old-school hip-hop bassline for the intro, BLAZAR’s retro synth work soon falls into place.  The opening verse by Afroman delivers the no-nonsense message- step up your game, drop dead weight.  Venturing into electro pop schemes, ‘Step it UP’ offers a fresh soundscape for Afroman to showcase his world-renowned lyricism.

Throughout 2021, Afroman was busy in-and-out of the studio during his ‘This Ain’t No Joke, This Ain’t No Gimmick, I Got to Get Paid in the Middle of a Pandemic’ Tour playing to his fans young and old across America, and recently releasing the music video for his sophomore Cosmic Wire single, ‘Cuz I’m High’, the official remix of ‘Because I Got High’ that brought the burgeoning rapper, Kid Lennon into the limelight.

Stephen Vicino is the founder of MusicExistence.com. He created this site to give talented musicians a voice and a way to be discovered.
@@svicino
Previous Gallery: Mac DeMarco at The Frost Amphitheater, Palo Alto, CA – 24 October 2021
Next Afrobeats & Diverted Reggae Genius Mr. PRO Shares Inspirational, Motivational And Affirmation Song ‘EURO MILLIONAIRE’