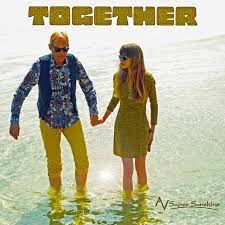 If you follow AV Super Sunshine, you know that zany visuals are kind of a trademark in his music videos. From neo-psychedelic dabbling to Lego-stylized visualizers, conventionality is never in play when this man is conceptualizing for a counterpart to a new single, and it’s in this sense that his latest release “Together” is no different from any other he’s stamped his name on over the years. Perhaps what separates this piece from the others in his larger body of work is the narrative it proposes and, more specifically, the emotional strength behind its creation in the first place.

AV’s relaxed attitude jumped right out of the speakers and connected with me when I sat down to hear this song for the first time a few months ago, but it wasn’t until I revisited it this October that I felt like it almost made more sense than the urgent tone he adopted for the first part of his career. He’s so smooth when he isn’t chasing after a big hook, and as much as I dig the big energy content he’s produced for us in the past, there’s something really special and right about what he’s doing in this most recent offering.

I like how evenly the guitar parts are balanced with the vocal here, and although the percussion has a hollowness that skews the chorus with a little bit of melancholy, it’s a point of contrast that only makes the overall composition we’re listening to sound richer as opposed to sounding busy. If there’s a man in this business who knows how to make the most of a full-bodied work, it’s AV Super Sunshine, and his efficiency is certainly looking as excellent as it ever has in “Together,” even if it is modified with a grander sense of emotion.

It’s a great time to be an AV fan, and those who have been listening to his music over the years are going to be particularly interested in how he’s blossoming in “Together.” His evolution has come together before our very eyes and ears, and though he’s not giving us a straight ballad in this single, he’s lending more of his soul to the studio than he ever has before – and sounding brilliant in doing so. I’ve got a good feeling about what the next year is going to hold for his career, and this track and its video could be the start of a very provocative and intimate passage in his life as a musician.