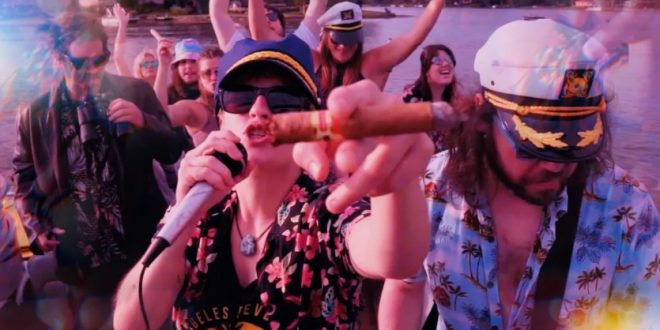 Akron, Ohio indie pop-rock supergroup Big Pop, has just dropped their debut single, the instantly catchy, attitude-driven “Can’t Even Tell“. “It was written about somebody that fell madly in love with some hip androgyne on a college campus somewhere.” explains the band.

“Can’t Even Tell” is the first part of an ambitious seven-part music/video series, with each song being released as a single.  Group founders Corey and Jeri wrote the songs by passing them back and forth between each other before the band was even formed. “It was all written during the Covid-19 pandemic so that vibe definitely hangs over every song,” says the band. “The seven-part music video we’re making plays out like an episodic mini-series, following a band who gets lured into an interstellar time portal by a mysterious figure and his henchmen!”

Indeed, the “Can’t Even Tell” music video follows a band shooting their first music video. Unbeknownst to them, a mysterious figure known as “Kron” is plotting something nefarious. With the help of his henchman Agent Collins, and the video’s director, Corey, Jeri, Cody, and Samantha find themselves stumbling into an interstellar time portal instead of celebrating the making of their first music video at a bar! You can watch the video below: