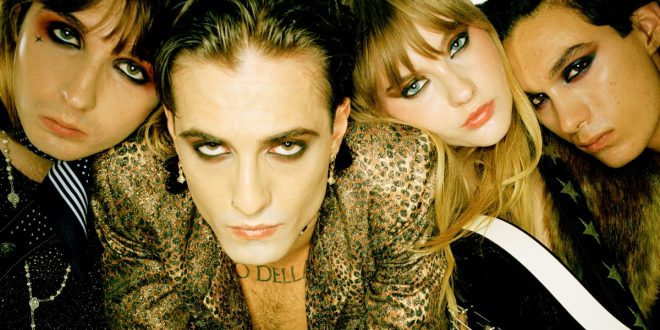 While North American music markets have historically been slow to accept foreign language bands into the mainstream, the success of Reggaeton and K-Pop in recent years has begun breaking down barriers in the American music industry. Streaming platforms have only expanded the reach of international acts with music being more accessible now than ever before. But one genre in particular has been slow to accept more cultural diversity. Enter Måneskin —the vivacious Italian rock band who won Eurovision 2021 and have brought rock n’ roll back into the US Top 40.

Even though Eurovision’s annual competition attracts sizeable audiences overseas, the hype surrounding the winner typically fades when the competition is complete. Over the show’s 65 year history only two household names have gone on to achieve international success and recognition. ABBA in 1974, followed by Céline Dion (a Canadian who represented Switzerland in 1988) are the only two winners to achieve widespread commercial success. But again, Måneskin is changing that.

Måneskin won Eurovision with their anthemic rock n’ roll stomper “ZITTI E BUONI” which has since logged over 200,000,000 streams on Spotify alone. From there, the band’s 2017 cover of Frankie Valli & The Four Seasons’ “Beggin’” started climbing the Billboard Hot 100 where it’s currently sitting in the top 20. The band also accomplished the impossible by pushing their way onto Top 40 radio stations across the US and Canada.

The next chapter for Måneskin begins today with the band releasing their first new single since gaining notoriety. Titled “Mammamia” to keep their Italian roots close to home, the track also gives a subtle nod to the Eurovison champions who put Swedish pop music on the map. Typical to the Måneskin aesthetic, the new song is suggestive and flamboyant but is sure to leave fans beggin’ for more. Check out “Mammamia” below.