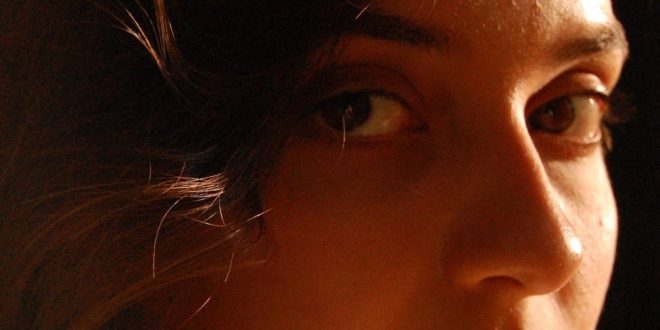 The poetic presentation of loneliness sounds and feels so much more tangible to the audience when offered amidst a simple setting, and in the new single “Simple Song” by singer/songwriter Lila Blue, we get that setting – and one of the more profoundly emotional songs to cover such a subject this year. There’s a lot of weight to this track and its accompanying music video; between the visual dynamic and the minimalistic instrumental setup, we aren’t made to expect a lot of punch from the vocal, which by contrast offers us the sharpest daggers of any component in this mix.

As a singer, Lila Blue has a remarkable voice and melodic disposition, and the strings here work to echo the sentiments of her lyricism quite epically. There’s nothing quite like the moderate harmonies she stirs up with the guitar part in this song, and while it makes the piano element a little more jarring when it comes into the arrangement, this was entirely necessary to facilitate the big finish she was clearly going for in this performance. If catharsis is to be sought in this artist’s output, it is to be earned and fought for much as it is in the real world, and that’s more or less the picture she paints in this release.

The melodic dissonance around the two-minute mark in “Simple Song” hits us and the rhythmic peace of the music here hard, and it’s through the conflictive illustration that forms at this midway point in the track that we’re able to really appreciate just how much Lila Blue is putting on the line in this single. She isn’t limiting her expressiveness to linguistics alone but instead running away with every textured pulse the strings or the keys could ever offer us, especially given the darkened, almost shadowy place from which they reach out to us in this cut.

Lila Blue’s music video for “Simple Song” elegantly captures the rollercoaster of emotion that the composition itself displays so effortlessly, and I would even say that it puts a greater emphasis on the personality of the material than just listening to the track by itself does. The big thing to take away from this piece is its creator’s consistency amidst even the most unpredictable of circumstances, and from where I sit, I see this is as a fine metaphorical statement about what she can bring to mainstream pop songcraft in general right now.

“Simple Song” is more than just a good look for Lila Blue’s discography – it’s a haunting show of strength from a composer who is beginning to get a reputation for chills-inducing harmonies with every track she stamps her name on. Both the single and its music video are exquisitely produced and performed by Lila Blue herself, and although there’s been a lot of debate about the trend towards minimalism in pop recently, I think this especially surreal – and intimate – work has a chance at satisfying proponents’ arguments both for and against the movement as it stands in 2021.