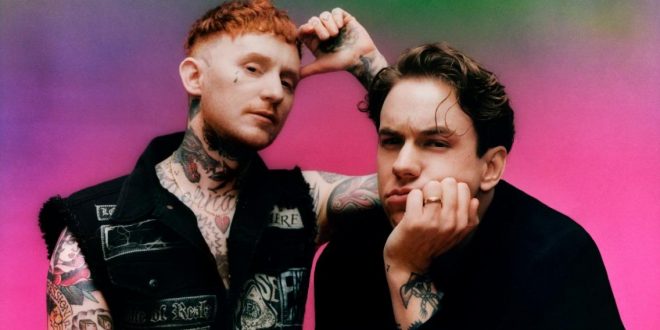 Critically acclaimed British punk rockers Frank Carter & The Rattlesnakes have released their new single “Off With His Head” featuring British newcomer Cassyette. The latest from their fourth full-length studio album Sticky, out October 15th via AWAL Recordings, “Off With His Head” is a raucous take on patriarchal society with Cassyette serving as a Bonnie Tyler for Gen Z to Carter’s Axl Rose or James Hetfield. Sticky, the band’s most fiery and addictive record of their career, is available for pre-order now at all DSPs; each digital pre-save will include an instant download of “Off With His Head” along with previously released singles “Go Get A Tattoo,” “My Town” and “Sticky.”

“Patriarchal society is a plague; it’s a pyramid scheme,” shares Carter. “It has strict regulations regarding who and how it benefits and is unique in its ability to oppress people at the exact same time it benefits them. ‘Off With His Head’ is a scathing generalized attack on trolls whose only joy in life is flexing their sixth-form grammar and Proud Boy mentality with the same smug tact as both sides of the fence in Good Will Hunting. The patriarchy is the worst because it enables all men to exist in a greater quality of life than all women and children, and while doing so, it also organizes the men into an untenable hierarchy that excludes a high percentage of men. Patriarchal society is designed to support apex predators.”
Sticky, produced by the band’s other co-founder Dean Richardson, celebrates the thrill of returning to freedom and all the joy and madness that entails. The album solidifies the pairing of Carter and Richardson as one of the most exciting partnerships in punk rock and Carter (previously of Gallows and Pure Love) as a vital voice in UK music, rallying against injustice, the patriarchy, right-wing politics and toxic masculinity. Their sound practically punches out of the speakers on the forthcoming collection with a new directness and immediacy and Carter sounding like an untamed force of nature, embodying the impish menace of Keith Flint one minute, Sid Vicious the next.