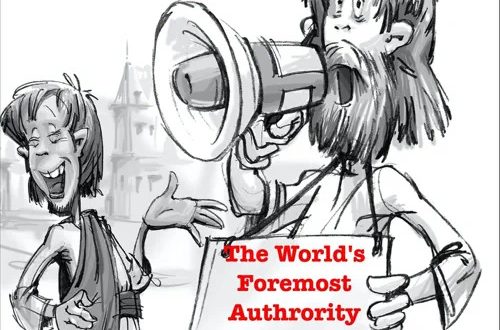 The iTunes chart-topping singer-songwriter releases his latest single and video. “World’s Foremost Authority On Everything” from his EP “Who Are You, Who Am I?”

“Dedicated to all the weird uncles at holiday gatherings, and those who really think they are ‘The World’s Foremost Authority on Everything.” – Bill Abernathy

This past May, Bill Abernathy ended an 8 month silence with the release of his EP, “Who Am I, Who Are You.” The EP includes 1 previously-released track, “More Than Meets The Eye,” as well as Bill’s cover of Gary Burr’s “A Thousand Wild Horses.” That single topped the iTunes country charts in South Africa, also racking up approximately 40K Spotify streams. Now, Abernathy has released a new single and video from the EP.

The intriguingly-titled “World’s Foremost Authority on Everything” continues the Abernathy tradition of vivid storytelling over guitar lick-filled music. With a blend of country music and amusing animations, the accompanying visual accurately portrays how people profess to be an expert on every topic. Bill mentions that everyone has to deal with that one co-worker or relative that has an opinion to share, even though he doesn’t possess the knowledge to back up his assertions.

“Inspiration for music comes from a variety of the many parts of my life,” Bill mentioned in a recent interview. “Events and experiences of mine, family, friends, and sometimes even people I have never met all contribute to the creativity of my music. I find it interesting and rewarding to let my imagination wander through the memory and spirit of life events and see where it takes me.”

Watch the video at https://www.youtube.com/watch?v=wmZZpi_jzQg

ABOUT BILL ABERNATHY:
Kansas City, MO singer-songwriter Bill Abernathy has released a string of successful singles and albums, starting with 2017’s Find A Way, featuring the #1 Roots Music Chart single, “Goodbye Will Never Come Again.” Abernathy continued his streak with another hit album, Crossing Willow Creek, which included the politically charged radio hit and Top 100 US iTunes single, “Cry Wolf,” as well as 3 other international hits. With over 14K monthly Spotify listeners, his songs have received more than 350K Spotify plays. All totaled, Abernathy’s music has been streamed more than 1 million times. Bill has been seen in Billboard Magazine, NoDepression, Americana Rhythm Magazine and many others. He has appeared on CBS, NBC, ABC and Fox TV stations and websites. For more information, please visit http://www.billabernathy.com.