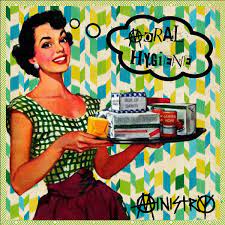 It’s good to recognise your own limitations. Musician, producer, and frontman of industrial metal ensemble Al Jourgensen Ministry admits himself that their best work is never done under a democratic president, so it makes sense that he has managed to jettison out one last Tr*mp-era record with the band before things get too positive again. And boy, did the last 18 months give them plenty of material to make a real blinder.

If the message wasn’t clear enough from its title, Moral Hygiene is a searing criticism of the American response to recent global issues. Because no matter how much you wash your hands, there’s no getting rid of the stench of social injustice that has been inflicted on the country for centuries, but which has become increasingly endemic in recent election cycles. Whether it’s abuses of power by those meant to protect communities or inadequate governance by elected officials, Ministry has a few bones to pick.

Moral Hygiene has high relistening value: spotting the audible easter eggs means every spin feels as exciting as the first as you pick out the Trumpisms spliced together to create their antitheses. “Disinformation” has a permeating bassline that makes the expose on ‘fake news’ and the lack of individual responsibility on their own ability to fact check that bit more unnerving. The Arabesque flair to “Broken System” brings a global feel to the global issue of climate change.  “Believe Me”‘s bitter, rage-fueled attack on the unnecessarily high death toll in the States is one of the more passionate tracks on this album. It contrasts from the clinical “Death Toll,” which matter-of-factly counts through that very data with an incessant, inescapable beat.

Al Jourgensen is credited as a pioneer of industrial rock for his early work with Ministry, but that doesn’t go far enough to acknowledge what he’s done to progress the genre. Moral Hygiene isn’t just a grimy homage to the bare foundations of the genre. Instead, it keeps this well trodden ground fresh by continuing to amalgamate different techniques and technologies to continually reinvigorate the sound. Jourgensen’s rough thrash vocals combat against news snippets and speech samples outlining the trauma of the pandemic, environmental issues, and political turmoils.  It cements this album firmly in 2020, although looking back on this record a little further down the road would surely be a fascinating venture.

Watch the video for Ministry’s cover of “Search and Destroy” now!