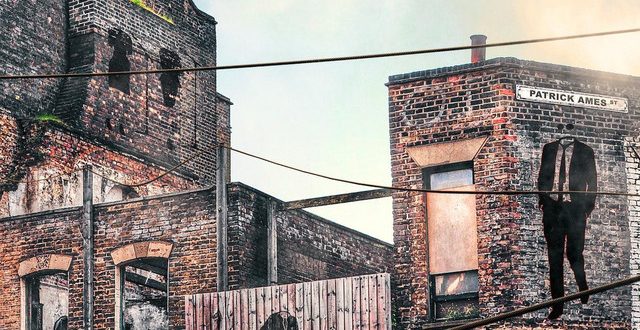 Composer and writer Patrick Ames continues to evolve his lyrically potent signature cocktail of junkyard blues on the new LP, “The Virtualistics.” due for release June 16th. The album contains 8 songs written during the pandemic by the Napa Valley-based artist, each one hopeful and resilient in its own distinct way. The album title was inspired by the nature of the recording style; although Patrick Ames writes the music and lyrics, much of his collaborations with producer Jon Ireson and backup singers Chana Matthews and Mikaela Matthews, have been virtual.

From the pandemic-inspired post-punk of “Second Wave” and “Essential Workers” to the funked up gospel rock of “Help People Up” and “Reawakened 2020” to the spacious, philosophical “Great Bunch of Molecules” and the bluesy, fun energy of “Rubber and Glue”, “Songwriter’s Block” and “You Make Me Scream”, Patrick Ames and The Virtualistics display a tenacious spirit throughout.

About “The Virtualistics”:
The Virtualistics. The band that never met. Remote collaboration is common but we never met during a difficult pandemic year. The four of us never practiced together. We didn’t sing together nor did we pre-plan the final sound. We were virtual entities, duly recording our tracks on various home devices and sending them in for assembly. Those famous photographs of The Virtualistics, studious musicians playing on stage, hard working in the studio, those tired looks of a fifth take, none of that happened. We never sang or played together.

Amazingly, it sounds like we were together, unvirtually, I guess is the word. It sounds like a 9-piece band that is funkin’ up the place even though we were half-depressed and struggled with work, virus, and bad politics. Half of the songs were released as singles mostly because I didn’t want to be depressed and fed upon that new release excitement every few months.

It’s been a year of virtual studio sessions that require large leaps of faith when you’re contributing to a song that isn’t finished yet and sounded like a sketch. It’s like that group game where everyone adds one line to the preexisting story going around in a circle and by the time everyone speaks the story is unbelieveably creative and interesting. Start with a few lyrics, add a riff or two, start weaving in counter melodies, add some phat beats – each song went around the Virtualistics circle a few times.

All these songs were recorded during the pandemic by The Virtualistics. – Patrick Ames

Stephen Vicino is the founder of MusicExistence.com. He created this site to give talented musicians a voice and a way to be discovered.
@@svicino
Previous No Past No Future Embrace Mindfulness and Birthday Cake Sativa on New Single “The Plug”
Next Payton Howie’s here for the party in “Never Go Home”