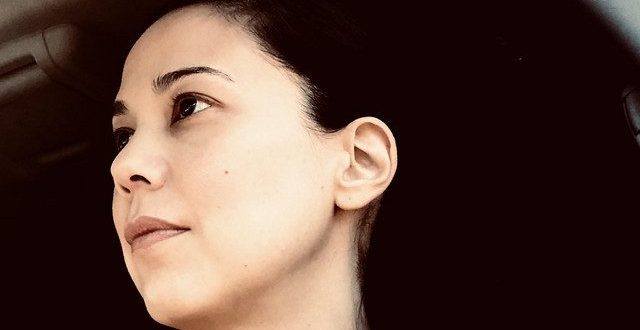 Andrea Levesque is a singer/songwriter and violinist based in New Hampshire. Under the artist name Atlantic Canyons, her musical style draws from an alternative rock foundation, while also incorporating new age pop and classical elements. While a featured guest on various singles of other indie artists, Levesque has also had success with her original material, beginning the 2020s with “One More Minute.” Now, with her most recent release, titled See the Hue, out late August of this year, she has achieved a considerable milestone; the EP became the number one most-added on the North American College & Community Charts.

Right away, the EP’s titular track does its part in showcasing a refined intro into the sound of Atlantic Canyons. There’s plenty of breathing room in the instrumentation, from the simplicity of the drums, to the carefully woven melodic focus of the guitar sequence, and, perhaps the most consistent quality, Levesque’s vocal tonality. Her soft harmonies sit well in the mix, given the already present air around the track, and they somehow manage a larger presence on previous single “One More Minute,” which feels natural in its placement as the EP’s second track. This implementation of smooth, harmonic vocals on guitar crunch may bring to mind similar female-led 90s acts, such as Veruca Salt or Scratching Post, which is a pleasant step forward. “At Sea,” the third track, sees Levesque’s tonality showing considerable adaptability to different stylistic moods, as well as thematic angles. In terms of the latter factor, I appreciate how it conveys being in a state of blissful delirium, to one of fleeting tension, and eventually, one of isolating uncertainty, all the while maintaining her previously established sensibilities.

Similarly, her gradual move toward an open-ended pop and electronic music direction on the EP’s midpoint track, “Always,” is complemented by a thematic angle of uplifting resilience. Through persistent feelings of perceived invisibility and lack of worth, Levesque not only counters those sentiments through her harmonies and chord progressions, but demonstrates a sense of empathy – a genuine reflection of having been lost and torn, while in some way, assuring listeners that recovery from their struggles is possible. By the fifth and penultimate tracks, “Sorry” and “Haunted World,” she carries this newfound strength, initially through outright expression, then, in the subsequent instance, through subtle, clever wordplay. The subtlety continues into the final track, “Life At the Top.” Rather than simply come across as a positive outlook of having achieved a milestone, it is acknowledged with humility, perhaps with undertones of cynicism. Ultimately, the track is fitting as the EP’s closer, solidifying its sense of intrigue, and with the notion that its sentiments expressed so far will be expounded upon in the future.

Overall, Atlantic Canyons’ See the Hue is indeed a step in the right direction, not to mention well-deserving of its recent accolade. Its songs are not only gradually paced and contain decent stylistic variety, but they also showcase a thematic identity that is distinctive, consistent, and wholly pertinent to Levesque’s artist name. Although it is really her first instance of fuller-length material, I’m genuinely impressed and look forward to how she expands her artistic expression.

I come from a family who is passionate about all things music. I learned to sing at an early age, and by 13, had my very own Fender Strat guitar. I tried my hardest at learning all that I could. Because I was born with cerebral palsy, I had to teach myself an adaptive playing style. I learned to write and record my own music, despite these difficulties. In college, I started making great use of my writing abilities by reviewing music, as well as copy editing. I guess it's best to stick with what you know, while welcoming a fair challenge at the same time.
Previous Single Review: Quiet Like A Thief “Travel In Time”
Next KIRKO BANGZ X RILL LEHIGH – BAD BIH