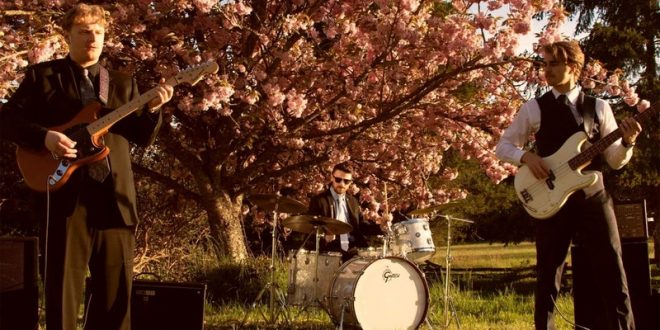 Doing something straightforward and frills-free is too often written off as being ‘retro’ in the contemporary rock genre, but if I’m to consider the aesthetical trappings and overall confidence of the creators in Summer Rain’s “Hold Her Hand,” I think it’s rather undeniable that there’s a faction of indie players who just don’t care what you call them. Summer Rain are among these players, and in “Hold Her Hand,” they’re sharply attacking the melody with a black-and-white concept some would compare to the simplicity of early rock n’ roll – and, from where I sit, it’s resulting in their having one of the smartest new rock tracks I’ve heard this summer.

The vocal here isn’t propped up in front of the groove or atop the distorted string play; it’s right in the eye of the storm, absorbing the chaos from the other instruments and producing a harmony as bold as any of beat the drums can muster. Rather than giving us a lot of technical arranging and meticulous verses, Summer Rain are playing the cleanest brand of messy indie rock I think I’ve ever heard before, and channeling rebels like Green Pajamas, Captain Beefheart, and Jet along the way.

Melodic rock hasn’t looked or sounded as good as it does in “Hold Her Hand” for years now, and that’s why I believe this is only the first hit we’re going to hear from Summer Rain as the 2020s begin to take shape. There’s an honesty to every part of this song that I’ve struggled to hear anywhere else in their scene recently, but even looking beyond the insularities of regional rock cultures, this is a standout any way you break it down. “Hold Her Hand” is basic, meat and potatoes pop/rock, and it’s likely the piece of your late summer soundtrack you didn’t even know was missing.