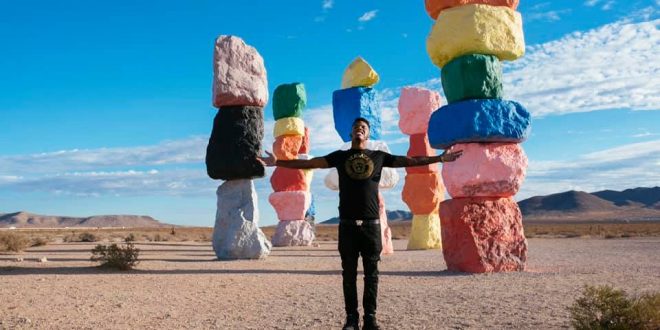 There’s nothing worse than a rapper who can swing sizeable beats only to drop a lot of noise on us when it comes to putting up a meaningful verse, and something tells me that Bruce Lii agrees with me on this point. His new single, “The Promised Land,” isn’t lyrically halfhearted by any measurement; on the contrary, Bruce Lii is straight up with us – “Talk is so cheap / Gotta pay to be free / Had to get off the grid / If you looking for me then I be overseas.” The narrative is stone cold, but without this player’s touch, it might not have the icy tone it does here.

The juxtaposition of a barren desert and bright lights of Vegas certainly isn’t a new concept for a music video, but from the angle that it’s presented to us in “The Promised Land,” it feels more lamenting than it does lusty. Thematically, Bruce Lii is pacing back and forth between two opposites here, balancing the conflictive aesthetics with a vocal execution that leaves nothing off the table with regard to his skillset. He’s not pulling punches on this front either, nor is he selling us a generic foundation.

Bruce Lii uses the groove beneath the bassline as his guide rather than the straight percussive thrust of the drums, and I think this lets him break off the lyrics smoothly as opposed to with a rigid, spitfire delivery as we’ve seen so many rappers in the south and northeast employing lately. The hook is elegantly preserved in this scenario rather than sounding so integrated with the lyrics that the integrity of the composition has been spoiled, leaving only the sugary pop elements behind. I like the intricacies in this single, and what they suggest about future content we might hear from this artist.

He’s got all the makings of a rising star for sure, and if he stays on this present trajectory, I don’t see why Bruce Lii won’t break through to the mainstream sooner than many of his competitors also stirring up attention in the underground will. “The Promised Land” is swagger-built and the product of a disciplined delivery above all else, and if you haven’t been listening to its beat this summer, it could work just as well as a backdrop anthem coming into September. That’s a versatility only possible in content from truly gifted players, and I think it’s a quality you’ll find in a lot of the material this artist is releasing right now.