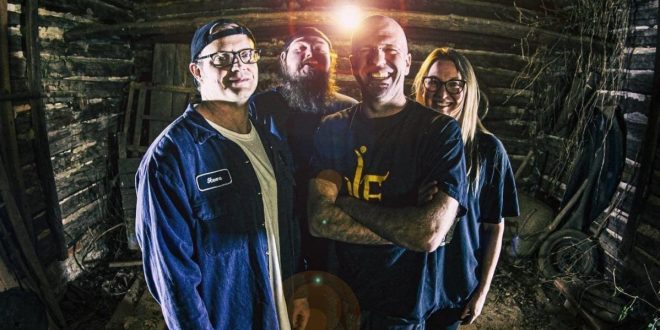 A throbbing bassline nudges volatile fretwork into place as Lords and Liars lay out the groove in their new video “Killdozer,” and while the visuals are striking, they’re not nearly as enthralling a display of strength as the music is on its own. Lords and Liars are taking a pinch of thrash, sludge metal, and even a touch of metalcore, combining the ingredients into a melting pot of mayhem and feeding us the resulting cocktail, and although it’s a lot harder than some of the other content emerging in the metal spotlight this September, this could be why the band is trending as well as they are at the moment.

The chest-beating punch of the riff never defines the substance of “Killdozer” so much as it feels like a broad-shouldered foundation for what the vocal produces lyrically. This is one of the more straight-up, verse-driven metal tracks I’ve listened to this summer, and best of all, it doesn’t draw inspiration from the old school to develop a solid narrative free of camp and overindulgence. That’s a big difference-maker in my book, and it lets us focus our attention towards the collective kick of the music as opposed to one specific gem in the instrumental treasure chest.

It’s honestly been a while since I got excited about a new metal release, but this latest video from Lords and Liars has the look and feel of something that could bring them a lot of love from fans and critics the same. The past year has been tougher on the hard rock and heavy metal communities than it has been a lot of other genres in the pop spectrum, but I get the idea that Lords and Liars aren’t looking to capitalize on the thematic elements a lot of their contemporaries are compiling out of this pandemic-influenced chapter in rock history. Theirs is a more personal story, and it’s starting to unfold in “Killdozer.”