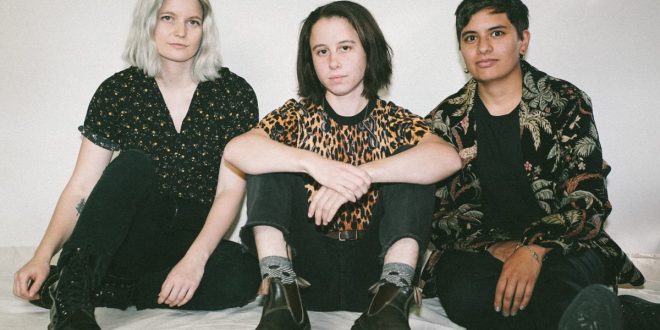 Anna Arboles says “Give It” is about self-determination and identity while Sapphire Jewell, who brought in the riff for the track, says “I remember writing this when I was going through a phase where I’d play a chord and then tried to play a riff on the lower strings at the same time. I liked the parts I’d written and then the rest of the band brought it to life in our crappy college rehearsal room.” Arboles chimes in, “Sapphire brought in the riff for this song with the refrain ‘Why don’t you just give it a chance’ and it moved me, so I went home and wrote the lyrics.” Rounded out by drummer Jessy Reed, Gypsum is a synergistic exercise in collectivist arrangement, dissolving artistic ego into cooperativity.

“’Give It’ was written as a meditation and subsequent statement that I have the autonomy to decide what I am and how to express it,” Arboles states. “As a queer person, I am constantly asked to answer for my identities and codify it for the comfort of other people’s understanding. There is a tension in the push, pull, and release of that experience, which I feel is manifested by the gravel of the riff that spills into the chord with all the extensions and then repeats. I love to play this song live. It’s quick and dirty.” Jewell emphasizes, “We used to always open our sets with it because it’s sort of like ‘here we are, now pay attention!’