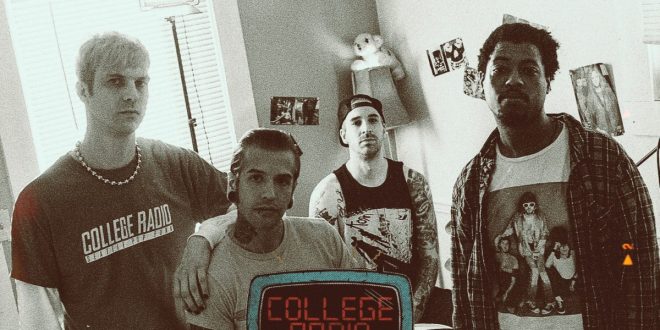 Seattle alternative pop-punk band College Radio has just released their newest single, “11:59”. The track has an over-distorted, bouncy pop-punk feel reminiscent of 2000’s pop-punk along the lines of Green Day, with a walking bass line and a sarcastic chorus about “feeling fine” during the chaos of the current world.

Lyrically, the song is about the band’s feelings on last year’s lockdown. “This was one of the first tracks we recorded during the pandemic and it really showcases how we felt and how the world really felt,” explains the band. “Singing this one is our bass player Evan. He really hit the nail on what 2020 was like for pretty much all of us.” Listen to “11:59” on SPOTIFY.

“11:59” was engineered by Dane Stafford and mixed and mastered by John Espy. Along with the track, College Radio has also released a new music video. “This makes it the third video shot in our bass players house!”, says the band. “It was shot by our great friend King Zabb and we got wild in this one!”  The video mixes footage of the band performing with newsreel footage of riots and unrest to further drive home the themes of the song. You can watch the video below:

Hailing from the Gloomy Emerald City of Seattle, College Radio have made a name for themselves with catchy choruses, hard-charging drums, and soaring harmonies. They combine classic old-school pop punk with an unexpected alternative twist, while making songs that are fresh, but instantly familiar. With the release of their new EP “I Used To Get Messed Up”  on Third String Records and “Growing Pains” College Radio have proven themselves to be one of the premier punk acts of the PNW.

Previous Single Review: Missing-Nin “Tell Me”
Next Brit Indie Band EMMA AND THE FRAGMENTS Release Animated Video for “Proper Everything”

College Radio Is Back With Latest Single