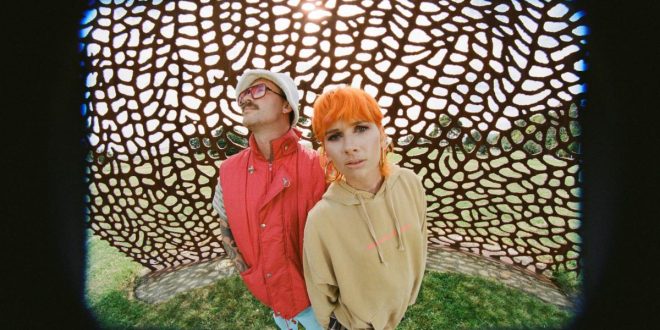 BROODS have returned with a new single and video for “Piece Of My Mind.” The first in over two years, this release provides a taste of their forthcoming album, Space Island. The new single offers an escape into the duo’s world of lush, classic synths and enchanting vocals as they launch into their next era.

“Piece Of My Mind” is a classic BROODS anti-anthem reckoning with grief and denial lit up in spectacular neon and animated with the sibling’s trademark wit and verve. Watch below the gorgeous B-movie-inspired visual filmed on 35mm and 16mm in the duo’s home turf of New Zealand. Evoking the arid mysteries of Space Island as well as sci-fi horror classics, the video is an endlessly fascinating fantasy that serves as a testament to BROODS’ strength of vision.

“We wanted to do something really special, because we don’t know when people are going to be able to go to live shows next,” says vocalist Georgia Nott, “So we wanted to create this world that people could come and visit from wherever they are.”
Despite its anthemic, arena-ready highs, “Piece Of My Mind” might be one of the darkest songs BROODS have ever written, deceptively bright in its tone but complex and exploratory in its lyrics. It’s the first chapter in a suite that builds on 2019’s Don’t Feed The Pop Monsterwith new layers of emotional clarity and pop atmospherics.