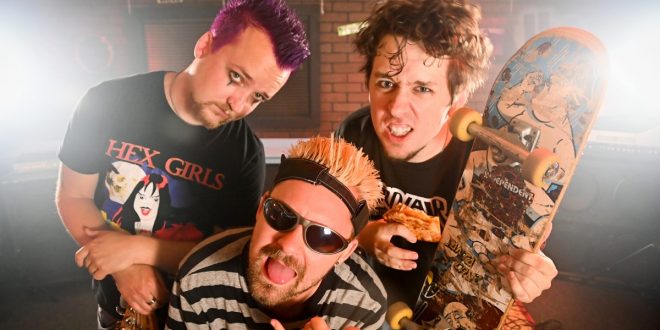 Newcomers The X Heart came together in late 2020 amid the Covid-19 Pandemic. Three friends who found themselves with time on their hands due to stay at home orders took a page out of the early 2000s pop-punk rulebook and channeled their boredom into creative fun. Their debut song and accompanying video for “2003” will be released on September 10.

Hailing from the middle of nowhere Minnesota (Brainerd) and drawing influences from groups such as MXPX, New Found Glory, Green Day, Blink 182, and Simple Plan, The X Heart delivers nostalgia and a rebellious spirit. The band is Jeff Mozey vocals/guitar., Andy O on bass and Chad Shredamen on drums.

With galloping guitars and a bombastic drum groove that underscores a hummable hook “2003” seesaws between hard-hitting pop-punk riffs and hypnotic melodies. “The song came together when I was thinking about how life was growing up. We were all innocent and had no concept of responsibility. Maybe it’s a little bit rose-colored glasses nostalgia but thinking back to that time is a good feeling for us,” said Mozey.

“We all met years ago playing in various bands and have been good friends ever since. One day I suggested starting up a new music project and everyone was stoked on the idea. It seemed pretty natural for us to start playing together and making some new music happen,” Mozey explains.

Mozey is all about the hooks in a song, for him it needs to be catchy and in your face. When not doing music, he can be found geeking out over Japanese history and thrift store shopping. Andy O started playing bass before he started kindergarten and grew up on a steady diet of hair metal and classic rock. He’s a true rock fan at heart and will tell you that the best old-school cartoon is Scooby-Doo. As a skateboarder, Chad Shredamen enjoys doing kickflips on the weekend. But not as much as hitting the drums with The X Heart. Growing up in the middle of Minnesota gave him many years to harness his craft.

“The X Heart came together out of a “back to basics” mentality. Every member in the band grew up watching the tail end of MTV, when music videos were still played on TV. So naturally many of those bands became influential to our music and style,” explains Mozey.

Stephen Vicino is the founder of MusicExistence.com. He created this site to give talented musicians a voice and a way to be discovered.
@@svicino
Previous Once Great Estate Releases First Full Length Album “Even The Undertaker”
Next Electronic Artist ALIA SYNESTHESIA Unveils Anhedonia EP