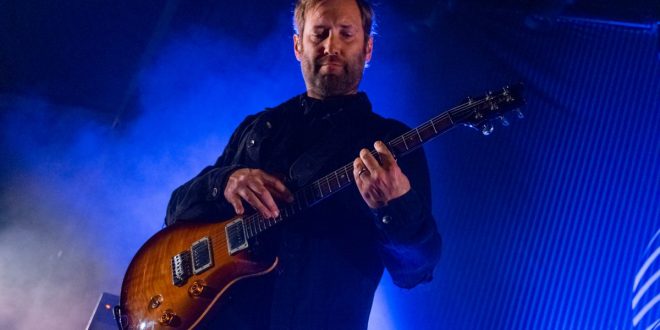 Venerable Seattle indie rock band Minus the Bear have announced the release of the Farewell live LP, due out October 29th on their longtime label home and equally celebrated Emerald City institution Suicide Squeeze Records. The album features previously unreleased live versions of fan favorites and deep cuts from throughout the band’s 17-year run, recorded at various dates along their 2018 farewell tour. Suicide Squeeze Records is proud to offer the 26 song Farewell as a 3xLP and on digital formats. Today the band shares the live recording of “Absinthe Party at the Fly Honey Warehouse”.

Farewell opens with a highly energized performance of Menos el Oso’s crucial track “Drilling.” Part of the beauty of watching Minus the Bear was hearing their songs unfold on stage and realizing how little studio magic was actually involved in their albums. All the electric wizardry by guitarists David Knudson and Jake Snider, technicolor synth work by Alex Rose, and rhythmic interplay between drummer Joshua Sparks and bassist Cory Murchy happen in real-time, and hearing the old favorites here in all their road-tested glory is an invigorating reminder of the band’s razor-sharp performances and forward-thinking creativity. Minus the Bear were never a band to rest on their laurels, and Farewell immediately moves onto late-career classics like the melancholic banger “Last Kiss.” The whole discography is covered—from first EP cuts like “Lemurs, Man, Lemurs” and “Hey, Wanna Throw Up?” to the title track of their final release Fair Enough. And in between, we hear the roar of the crowd, the heartfelt thanks and bittersweet ruminations on the passing of the years by Snider, and the occasional dad joke by Rose.
Farewell covers a lot of ground across the span of its 26 songs and two-hour run time. Yet every moment is a reminder of why Minus the Bear were such an experiential live band.
Suicide Squeeze Records is proud to offer Farewell to the world on October 29, 2021, as a 3xLP and on digital formats. The initial pressing is limited to 3,000 copies (1,900 on custom opaque gray vinyl – retail exclusive, 600 on custom opaque gold vinyl – artist exclusive, 500 on custom opaque red vinyl – label exclusive).
Pre-order/save Minus the Bear’s upcoming live album Farewell HERE.

Previous You, Me, & Everyone We Know debut new track “The World is Ugly”
Next Gallery: Chris Farren, Jeff Rosenstock, Small Crush at Garden Grove Ampitheater (08.30.21)