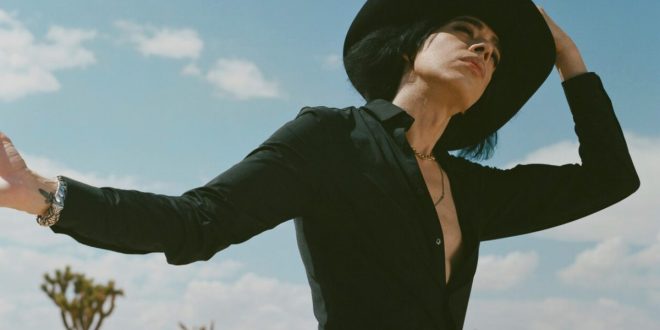 Lawrence Rothman has unveiled the stunning music video for their track, “Glory” (ft. Katie Pruitt). The single comes off Rothman’s recently released LP Good Morning America, a triumph in displaying the musician’s prowess in addition discussing their pent-up anxieties about the world around us, with “Glory” similarly touching on feeling crushed by one’s own mortality in an era built upon superficial connection.

The Mary Rozzi-directed music video takes the dreary sense of isolation that the song makes note of in the expansive desert landscape in which a large portion of it takes place. Ultimately, it unfolds incredibly cinematically, with sweeping shots of a breathtaking landscape and cuts of Rothman taking center stage, confrontationally baring all.

“I am so honored to have had the chance to direct a video for Lawrence,” said Rozzi. “‘Glory’ is a beautiful track and one that resonates with me personally on such a deep level. A 6 min track can be intimidating, but with their vision and trust, I felt a sense of true freedom that I haven’t had the chance to feel in quite some time.”

On the making of the music video, Rothman wrote the following: “‘Glory’ was filmed in Pioneertown, CA on a hot June day which parallels when I wrote the song a year ago at small house I rented in Joshua tree. The A.C went out so the best thing I could do was take a hike, during that hike the lyrics and melody came to me like a waterfall. It was in the height of covid lockdown I remember feeling like, what does it matter to write another song and put in the effort. 8/10 though many artist won’t admit it, we first write from a place of pain or joy or some triggered emotion, but we record it and release it to the public for validation and stroking of the ego. Mortality and appreciation of being alive was more magnified during last summer’s lock down. Our lives can be taken so fast and unexpected. This what I wrote about in the song and the video displays the isolation I felt during a very hard year but also celebrating the idea of being a wanderer and exploring inside your own ahead uninterrupted is not a bad thing. You can confront the good and the bad about yourself without the noise of others.”