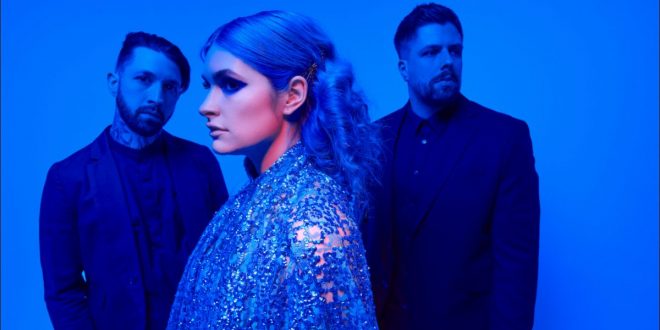 Spiritbox have unveiled a brand new track today titled “Hurt You”, from their highly anticipated debut album, ‘Eternal Blue’, set for release on September 17th on Rise Records. The band have also released an accompanying music video for the song which can be watched below. Fans can find “Hurt You” on streaming platforms HERE.

Speaking on the new song and its accompanying music video, Spiritbox guitarist, Mike Stringer shares “Hurt You is a song that was written before the pandemic, in early 2020 during a snowstorm. We were stuck inside, and couldn’t go anywhere, so this song flowed out of myself, Courtney, and our producer Dan pretty quick. The subject matter of the song explores toxic codependency, and the feeling of knowing that something is doomed to fail, but choosing to go down with the ship. The video, directed by Dylan Hryciuk, is horror-inspired and depicts love in four different acts. It’s the first video we’ve made where we do not make an appearance, and allow the story to be the main focus.”

Spiritbox, one of the hottest new bands in heavy music, thrilled fans back in May with the official announcement of their highly anticipated debut album, ‘Eternal Blue’, which is set to drop on Friday, September 17th, 2021 with pre-orders available now by clicking here. The band sold out of all vinyl pre-orders within the first 24 hours of announcement and on-sale.

Before “Circle With Me” the band released two break-out, hit singles last year – the heartbreaking and otherworldly “Constance”, which has clocked up 10.5 million streams to date and re-entered the Billboard charts last week at #1 Hard Rock Digital Song Sales, #4 Rock Songs Core Genre, #19 Hot Hard Rock Songs following the release of the very special reimagining of “Constance (Acoustic)” and the unrelentingly brutal “Holy Roller” which has run up 22.9 million streams to date and debuted at #25 on Billboard’s Hot Hard Rock Songs and charted as the #1 song of 2020 on SiriusXM’s Liquid Metal.