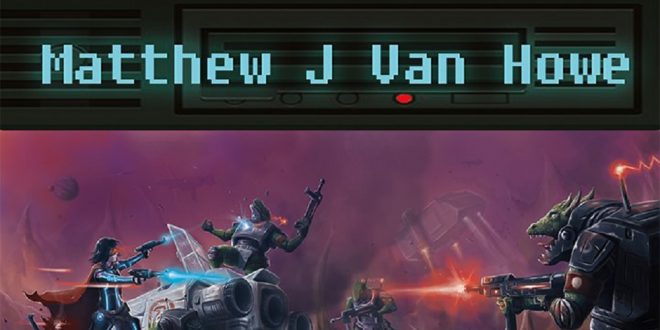 Abrasive and a little affectionate at the same time, the rhythmic dispatch of the synths in Matthew J Van Howe’s “Reborn the Warrior” is a feature listeners should expect to get a lot of in the new album Legend of the Galactic Princess this summer, but it’s far from the lone attribute making the record a hit in my book. In tracks like this one, the patient and vividly melodic “Right the Wrong,” cosmic “Waterfalls of Dymoora,” and “Jungles of Syroolya,”

Van Howe isn’t just granting us access to a sci-fi-style melodicism, but extending a bit of his internal conceptualism and emotional connection to the music through the only avenue he’s got. There’s an intimacy in this tracklist that just doesn’t exist in the majority of pop or electronica I listen to, and not for lack of trying on the part of his competition. When reviewing the contents of this disc side by side with what we heard in his first few albums, this is more mature in tone and a lot more far-reaching lyrically. It’s a culmination of years’ worth of experimenting, and not simply the mad ravings of another pandemic-era player convinced of their own eminence.

The title cut in Legend of the Galactic Princess has a Goliath-like groove that I could spend an entire afternoon getting lost in, and its slower counterpart in “Beneath the Dust” is ironically just as thrilling for much of the same muscular reason. “Across the Starry Sea” and “Her Greatest Loss” dive deep into the industrial-noise lexicon and emerge with melodic terms that make even their most extreme moments seem necessary to facilitate a greater point.

There’s poetic value in every part of this record, both instrumental and verse-adorned, but it’s in really blunt tracks like “Battle Cruiser” that we feel just how passionate a statement Matthew J Van Howe is trying to make with this record as a whole. Every one of these songs feeds into a bigger picture he’s trying to paint for us, and I must say that, for being a relative newcomer to his sound and style this year, I was immediately taken by all of the detail and thought he clearly put into every inch of sonic space here.

With his soaring lead vocal in “Set Forth” and suffocating synth play in “Awake from Thy Tomb,” Matthew J Van Howe sets a new standard for synth play this season and potentially delivers a record that his competition will have a hard time matching on their own. This hasn’t been a particularly great period for the electronica underground, and though this isn’t a straight electronic work, there’s plenty here to get the scene’s faithful more than a little turned on by his style. I was impressed by the depth of Legend of the Galactic Princess instantly, but it wasn’t until I spent a bit more time with its tracklist that I came to feel how substantially expressive every one of its songs really is. It’s a hard listen to forget, and something I think every alternative fan needs to take a peek at right now.