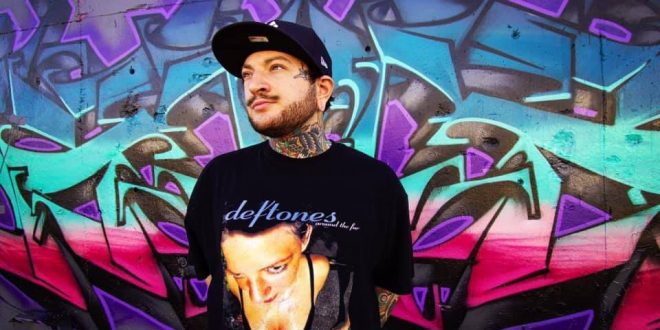 Dizasterpiece Makes Triumphant Return On ‘Regression Toward The Mean’

New Jersey East Coast hip-hop artist Dizasterpiece has just dropped latest album, the nine-track Regression Toward The Mean. This is his first solo album since his acclaimed 2013 album ‘The Abominable Sowman’. The album features the single “Echo Chamber”,showcasing Diz’s signature energetic delivery, which is a true spiritual throwback to artists like The Wu-Tang Clan and The Beastie Boys.

Lyrically, “Echo Chamber” touches on the fictitious nature of both social media and the music industry. “Echo Chamber is about how twitter and other forms of social media enable people to live out fake personas and have people validate them rather than being real with themselves,” explains Dizasterpiece, “It also touches on corrupt and unjust things that happen in the music business, and being fed up with toxicity being glorified and spoon fed to the people.”

Dizasterpiece has also released a music video for “Echo Chamber”. The video was shot in Austin, TX by Brandon Brumley, aka “Bad Mantra.” “We improvised the first few hours around the downtown area which was pretty fun,” explains Dizasterpiece, “People passing by stopped to say they dig the sound which gave me some really good energy to work with. Throughout the shoot, Brandon would stand up close and move the camera along with all my movements, but almost in an opposite-like direction, which is what gave some of those shots their unique flow.” Check out the video below:

DIZASTERPIECE is a passionate, creative, realism-driven lyricist and hip-hop emcee from New Jersey, with strong roots in the punk and hardcore community. Unlike traditional hip-hop artists, who usually take the path of creating endless mixtapes, Dizasterpiece took the unconventional route, treating this project like every other punk/metal band he was in growing up. He recorded a record, began booking shows, and touring independently, playing rap shows, metal/ hardcore, and indie rock shows, while gaining momentum on his own which led to landing gigs with notable artists such as IMMORTAL TECHNIQUE, RAKIM, CAPPADONNA, PETE ROCK & CL SMOOTH, R.A. THE RUGGED MAN, CAGE, CHRIS RIVERS, and DANNY DIABLO all in the last three years.